The Speech: A Man Divorced From Reality 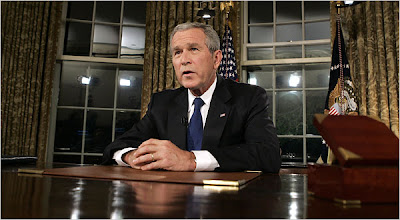 I take no pleasure in having nailed what President Bush was going to say in his primetime speech on the Iraq war last night in my preview post because the whole affair is so bloody awful. As it was, I couldn't even watch the man and spent most of the speech listening to him drone on, chewing his words as always, as I stood on the front steps of Kiko's House taking in the cool night air.


So rather than rehash, I'm going to turn the stage over to Andrew Sullivan, who provided a typically sensitive and well-drawn reaction that I absolutely concur with.

"He seemed almost broken to me. His voice raspy, his eyes watery, his affect exhausted, his facial expression almost bewildered. I thought I would feel angry; but I found myself verging toward pity. The case was so weak, the argument so thin, the evidence for optimism so obviously strained that one wondered whom he thought he was persuading. And the way he framed his case was still divorced from the reality we see in front of our nose: that Iraq is not, as he still seems to believe, full of ordinary people longing for democracy and somehow stymied solely by 'extremists' or al Qaeda or Iran, but a country full of groups of people who cannot trust one another, who are still living in the wake of unimaginable totalitarian trauma, who have murdered and tortured and butchered each other in pursuit of religious and ethnic pride and honor for centuries. This is what Bush cannot recognize: there is no . There are no Iraqis. . . .

"But it seems he will get his way; and his party will live with the consequences. So, alas, will all of us. If the Democrats and adult Republicans cannot stop this slow march to an even lower circle of hell, then we have only one recourse yet: to pray that we’re wrong, that a miracle can happen, and that the enormous sacrifices of so many good, brave and brilliant men and women are not ultimately in vain."

Posted by Shaun Mullen at 6:28 AM
Email ThisBlogThis!Share to TwitterShare to FacebookShare to Pinterest

Cloture this ! Time for Iraqi War surtax.
.
Time to put GOP money where their strategic mouth is.

A net blogger, "Larkrise" makes a key point re American continuation in Iraq....."but I suspect that the loss of any financial comfort will be the only means to effect substantive change for the better."
I agree and see a potentially win win solution.

The GOP wants to continue the Iraq war at its present level.
The GOP is the party of corporate and affluent interests.
Ergo, morally, ethically and economically sound policy dictates that a war surtax be enacted.
If 130,000 plus troops for years is valid and beneficial for America's strategic interests, it follows that today's voters and leaders, and not tomorrow's middle class or children, should step up and fund this policy.