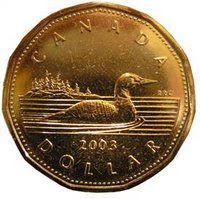 Boosted by high commodity prices and a weakening U.S. dollar, the Canadian loonie reached parity with the greenback Thursday for the first time in nearly 31 years.

"[This promises] to boost the energy and import sectors and give consumers cheaper vacations but spelling more trouble for 's industrial heartland.

"The loonie, which has been gaining on its American counterpart since bottoming out below 62 cents in early 2002, has recently been on a spectacular run, up from 95 cents at the start of September and from under 90 cents last spring.

" . . . The last time the dollar was at par with the greenback was , when Pierre Trudeau was prime minister and René Lévesque had just become premier of . That high point for the currency signaled the beginning of a long slide for the loonie, as national unity concerns and mounting worries about Canada's worsening government finances over the next decade or so scared away foreign buyers of the currency."

More here. And here on the dollar falling to a new low against the Euro.
Posted by Shaun Mullen at 5:32 AM
Email ThisBlogThis!Share to TwitterShare to FacebookShare to Pinterest

Dollar tanks on lower U.S. interest rates
.
Jane and John Doe must now pay to bail out the culprits.
When I gas up my vehicle I will be paying extra because the dollar's buying power has taken a hit.
The financial types that made the suspect mortgages walk off with big commissions from making the loans, packaging the loans, reselling the loans and repackaging and reselling the loans until the "Ring around the Mortgages' game came full stop.
Jane and John Doe now have to pay for greedy, shoddy, schemed asset allocations in the financial sector not only by having margins on their next loan increased but by watching the greenback crash world wide as government 'of the banks, by the banks' lowers interest rates to bail out the thieves.

Capitalism spills more cash resources on uneconomically useful people and projects annually than the combined unfunded requirements of social security and Medicare. Place a one one hundredth of a percent VAT tax on non consumer capital flows so the Doe family can eat at the same trough as the CEOs and their extended family.