Burma: This Revolution Will Be Televised 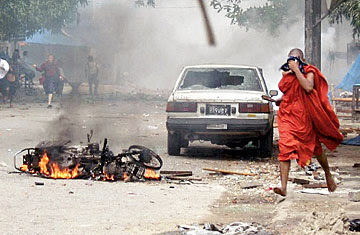 I've never been to Burma and the nearest I got was Thailand. So I can't tell stories about how my driver snuck me into clandestine late night anti-government meetings in Yangoon because I'd be lying.

This, I suppose, is a rather half-arsed way of saying that I've felt a combination of pessimism and impotence over the violent crackdown against peaceful pro-democracy protests by monks and civilians in the South Asian backwater now officially known as Myanmar.

Pessimism because I don't believe any amount of outside pressure for increasing sanctions, let alone imprecations by that humanitarian lightweight, George Bush, will sway Burma's thuggish military junta in the near future, and impotence because I feel like there is damned little that I can do.

China, chief trading partner and supplier of arms to Burma's generals, and Russia, the second of its three main trading partners, have no interest in joining calls to turn the screws. This is because both countries mirror Burma in troubling respects.

India, the third big trading partner, could fill the void left by America's diminished world standing, but will not. India comes in for special scorn because it presumes to be an emerging world power but behaves like the self-absorbed backwater that it was not too many years ago when push comes to shove.

That so noted, there is an aspect of the story that bloggers do have a role in: Foreign news media is barred from Burma, so supporting its citizen journalists in defying the junta by using the Internet and cellphone cameras to tell the world what's really going on is important, as is being mindful that their involvement can carry the heavy price of arrest and years in imprisonment if they're caught.

The thirst for democracy in Burma is unquenchable, and sooner or later -- probably much later -- the junta will fall and there will be free elections.

It is a small consolation, but nevertheless important, that this revolution will be televised.

Meanwhile, check out Burma NewsLadder, an aggregator of current stories.
Posted by Shaun Mullen at 4:53 PM
Email ThisBlogThis!Share to TwitterShare to FacebookShare to Pinterest

So what's your plan? How do we free the Burmese? Do you think it's worth doing? Does it merit a military intervention? Would you encourage the Chinese to intervene militarily? The Thais? The Indians? Should we blockade the harbors? I know. We should lodge a complaint at the UN.

This is now Bush's fault, eh? I might be inclined to agree if I ever hear of a feasible proposal for changing the situation, but it's hard to get on a bandwagon that hasn't arrived yet.

This is no more Bush's fault than it is the fault of his predecessors who also did not deal with the junta as firmly as they might. So many hotspots, so little time.

I think that the very nations who coddle the junta -- China, Russia and India -- hold the key if there is indeed a key. You correctly note that that bandwagon has not yet arrived. I don't expect it to in the forseeable future.

Yes, probably, but what is the nature of that key? I believe you would rule out anything that might actually work.

Damned if we do, and damned if we dont! We are reviled for the war in Iraq, we are accused of only going in for oil. What would the defference be if we went into BURMA, they also have oil and natural gas reserves. The only way the Bumese will be free is if they arm themselves and fight for their freedom.