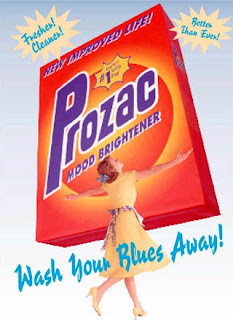 It seems that whether you visit a doctor for a hangnail or a serious psychological hang-up nowadays, you'll be offered antidepressants to spirit you through the doldrums of recovery and into the sweet breezes of tomorrow.

With hundreds of millions of prescriptions for the drugs Prozac, Zoloft and the like being filled each year worldwide, it's not surprising that serious researchers are beginning to ponder the long-term effects of antidepressants.

One such person is Helen Fisher, an anthropologist and research professor at the Center for Human Evolutionary Studies at 's , who recently published a theory that serotonin-enhancing antidepressants such as Prozac, while lifting a patient in the short term, can actually kill off feelings of romantic love and attachment to a partner.

In fact she goes as far to suggest the rampant over-prescription of antidepressants may well jeopardise the genetic future of the human race because of the dilution of the urge to love.

(President) Bush has tapped Michael Mukasey, a retired federal judge and ex-federal prosecutor (to be attorney general). The decision to go with Mukasey is a sign that Bush actually recognizes his current political weakness, and understands that if he goes to the mat for a controversial conservative nominee, he will surely lose. Clearly, somebody in the bunker is thinking clearly, at least on this matter.

A North Korean ship that purportedly reflagged itself as South Korean to evade Western investigators has disappeared from view after the Israeli strike on last week. The Al Hamed delivered what the Syrians classified as cement in the days before the strike, and an Israeli tracer says the ship has not been seen since.

A 30-pound chunk sliced off one of the most famous meteorites in the world, the Willamette meteorite, will be auctioned on Oct. 28.