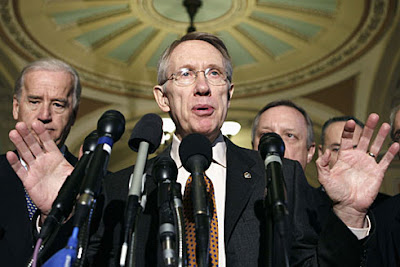 Another day, another opportunity to heap well deserved fire and brimstone on those feckless Democrats.The leadership of the Gang That Couldn’t Legislate Straight has termed as merely "unacceptable" President Bush’s open-ended war strategy, but went supernova over reports that former Solicitor General Theodore Olson is the likely replacement for Alberto Gonzalez.

Senate Majority Leader Harry Reid declared flat out that "I would do everything in my power to stop Ted Olson from being confirmed," but just couldn’t get all that worked up over trying to bring to an end a war that has cost nearly half a trillion bucks, squandered nearly 4,000 American lives, brought the Republican hegemony in Washington to a crashing end and lowered the U.S.'s world standing to junk-bond status.

The way conservative Olson certainly is no great shakes and like Gonzo makes former AG John Ashcroft seem pretty good by comparison. And while Olson probably has more gray matter than Gonzalez and therefore would be a more artful prevaricator, he certainly would not bring even a modicum of independence back to the beleaguered Justice Department.

As it is, the Democrats own standing also is junk-bond status. And while they bloviate with the best of ‘em, their acquiescence over the war borders on the criminal.

Hat tip to Sarabeth at 1115
Posted by Shaun Mullen at 5:35 AM
Email ThisBlogThis!Share to TwitterShare to FacebookShare to Pinterest