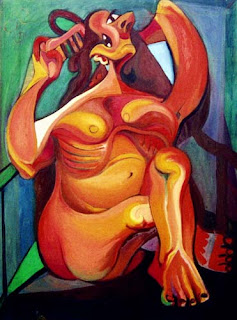 We've all heard stories of men who feel they've been trapped in a relationship by a woman who claimed to be using contraception, then "pulled the goalie," went off the pill and ended up pregnant.

In many instances when men cry foul, I reckon it's a case of a bloke trying to worm out of his responsibility for having not used a condom and, looking ahead, abdicating obligation for the welfare of the child.

On the other hand, women sometimes do lie about this stuff.

The question is: if a couple have agreed to forgo the use of condoms in favour of the birth control pill and then the woman secretly halts that use to get pregnant - who's to blame?

Is the connivance displayed by the woman offset by the stupidity and selfishness of the guy who leaves the onus for contraception with the female? And is this legitimately a mistake for which a man must be held accountable for the rest of his life? . . .

Why does God allow natural or manmade disasters to kill innocents? For Hindus, that's a multiple-choice question.

For years, the [Bush] Administration ducked and weaved to avoid allowing the morning-after pill called Plan B to become available to Americans facing the consequences of imprudence, mishaps or poor judgment.

Now President Bush, faced with his own need for a Plan B in , is unwilling to abort his misbegotten war.

The crux of the analogy is that the man who self-righteously wants individuals to take responsibility for their mistakes keeps denying his own and letting innocent young people pay for them with their lives.

Ah yes, the Demowienies are at it again. Trying to find the center instead of doing what their constituents want them to do. They should call themselves the Centrist party and quit pretending to represent the people. The only difference between them and the Republicans is their fear factor. Fear of what is the million dollar question.

So, let's get this straight.

Last year, the dysfunctional clusterfuck, otherwise known as the "war" in , was such a failure the American People booted out Karl Rove's "permanent majority" and tasked the Democratic wing of the War Party to end the, uh, war. (Okay, no one ever said Americans were the sharpest tools in the shed.)

This forces Bush to change course by "staying the course" only this new 'stay the course' strategy turns the 'course' into a wide-bodied, speed limitless, blank check super highway to hell. The "surge," a word used by simpletons because the word "escalation" has too many syllables for silly, stupid Americans, makes the previous clusterfuck look like a slow dance at a high school prom.

It's a mad, mad, mad, mad world. And the so-called "leader of the free world" is the maddest of them all. He's no emperor without clothes, but a monster without a soul.

The plain fact is that everything that has happened--from the Patriot Act to politicizing the government, from illegal surveillance to indefensible acts of torture, Gonzales to , Rumsfeld to rendition, to --every act is calculated to further the process of twisting into a fascist hegemony. And do I blame Republicans . . . solely, for this cancer? I do not! Democrats are equally to blame for seeing the cancer and refusing to cut it out! You are equally to blame. I am equally to blame, and if there was anything left to say, I'd say it.

is dying, and late at night I find myself surfing sites that discuss the process of emigration.

Despite six years of promises, officials say continues to look the other way at wealthy individuals identified as sending millions of dollars to al Qaeda.

Image: "Pregnant Woman in a Dressing Room"
by Fred Herbert