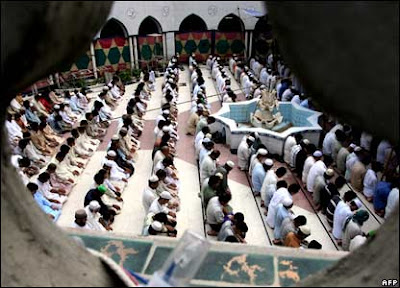 PAKISTANIS PRAY ON THE FIRST DAY OF RAMADAN

The surge, according to Bush, is working so well that the troops have to stay. Meanwhile, Tony (not gone yet) Snow says that the Iraqis are lagging on the benchmarks but other important things have been accomplished. If they weren't important enough to be benchmarks in the first place, why do they count now? Whatever.

It has been extremely difficult over the past several months to pay any attention at all to the discussion of from our political and media stars. It is all just complete blather, and never means anything. All of these stern and worried and tough words spill endlessly from their mouths -- they all proclaimed in May that September was the Day of Reckoning: there would be bipartisan, forced withdrawal if the political benchmarks weren't met -- only for the same thing to happen over and over. The conditions are not met; Bush proclaims we are staying; and the Washington Establishment submits.

"Reform" and " are words that don't appear together very often. The last big reform the area went through was back in the 18th century, when Abdul Wahhab reformed Islam. We know where that led some people. Today though, is actively going through a process of social, economic, political, and yes, even religious reform. Just how will it play out? It's a little too early to tell, but there are positive signs.

The Mayo Clinic jumped into the national debate on improving health care yesterday, calling for every individual to have basic universal insurance as a step toward gradually replacing the current employer-based system.

But Mayo, in a proposal hammered out over 18 months by a panel of more than 400 health policy experts, is not advocating a government-run single-payer system. Instead, it suggested that private insurance companies be required to offer standard plans with many options, like the Federal Employees Health Benefits Plan available to government workers.

The N.J. Supreme Court has ruled that doctors have "no legal duty" to tell women who obtaining abortions that the fetus is "a complete, separate, unique and irreplaceable human being."

By general acclaim, it’s a fairly Golden age for TV. Thanks to HBO, but also for other reasons. Mostly it has to do with improved story-telling, due to whole season or multi-season story arcs, made possible largely by the DVD market, I suppose. Shows are being made to be sold as season-length packages. The effect on quality is salutary, but there are two risks. First, the show runs too long. A good story is undone – the early promise retroactively debased – by writers forced to drag it out; keep the golden goose laying past her prime. Second, a good show may be canceled, leaving the audience unable to finish the damn story.

I grew up in a small Midwestern town; small literally and metaphorically. It was a town that could be counted on to be about five years behind every trend, from fashion to music. Local radio brought me a steady diet of bad country music and torturous top 40. But there was another station far away, in the big city. Late in the evening, if the wind was right, and I tweaked the dial just so, I could hear the music of a world beyond that civic stronghold against the forces of modernity. On one of those late evenings, as I craned my head towards the speaker, I heard a sound, a voice, a music so new it split the night and left me forever altered. The voice belonged to Patti Smith.