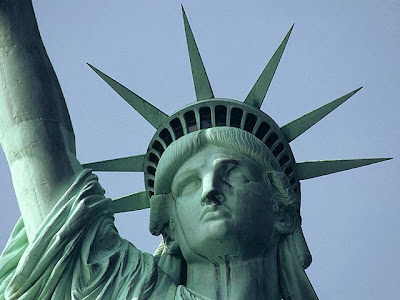 Representative Anthony Weiner is right to keep tilting at the Statue of Liberty — or at least at Washington’s insistence that the statue’s top be closed to the people it is meant to inspire.

Generations of tourists had climbed the 162 steps to Liberty’s crown until the site was closed after the Sept. 11 attacks. The statue was partly reopened three years ago, with visitors ushered through explosives detecting “puffer” machines and other security, and then allowed only up to the statue’s hem. A glass ceiling was installed where the stairs were shut off.

Standing underneath it, visitors can gaze upward into the void, a tremendously unsatisfying experience, especially for those who remember the exhilaration of the climb and the panoramic views of water, city and, yes, freedom.

National Park Service officials, testifying before the House this week, said concerns over terror now have given way to worries that the top of the 121-year-old structure is a potential fire trap. And they warned the narrow staircases were never meant to handle hundreds of thousands of visitors a year. They plan to keep the tourists at Liberty’s hem. That’s unacceptable.

’s refugees tell heartbreaking accounts of suffering, displacement, and shattered dreams, but these refugees represent more than mere human interest stories. Collectively, the outpouring of millions of Iraqi refugees into a very small number of neighboring countries poses a dramatic security threat to the , and there is no sign that threat is going away.

-- JON ALTERMAN
When no one was looking, someone cut a hole out of the Democrats' much-hyped ethics bill. A watchdog group which caught it suspects the Democrats of undermining their own effort to clean up Capitol Hill.

It is mere months after Democrats won the election on a promise to defend 's middle class. The nation demands action to address burgeoning health care and environmental crises. But somehow, the first significant initiative the newly empowered Democratic Party is likely to pass into law is a lobbyist-written trade pact to help Big Business ship jobs overseas.

Quick: Am I talking about the early 1990s or the present day?

Back in 1992, candidate Bill Clinton chastised the North American Free Trade Agreement (NAFTA) at events with blue-collar workers. A year later, President Clinton joined with Republican and Democratic legislators to ram NAFTA through Congress "over the dead bodies" of those same workers, as the chairman of American Express gushed at the time.

We all remember what followed. Factories were boarded up, thousands lost jobs, wages stagnated, income inequality exploded, 19 million Mexicans were thrown into poverty, and "the dead bodies" didn't come out to vote during the next election, helping the GOP evict Democrats from Congress in 1994.

In the sad-but-probably-true department comes a Politico story about how GQ killed a piece about in-fighting in Hillary’s campaign for cover-story access to the former President.

Alan Greenspan says there's nothing he could have done about the housing bubble. Monetary levers are too crude to do any good, and the least worst option is to let the bubble collapse on its own and then pick up the pieces afterward.

Maybe so. But that still doesn't explain why Greenspan cheered on the bubble back in 2004.

One of the stranger efforts of the political right over the last decade has been the effort to paint Rachel Carson as a mass murderer, on the basis of bogus claims conflating the US ban on non-public health uses of DDT with a non-existent ban on the use of DDT for indoor spraying against malarial mosquitoes. Starting from the lunatic fringe of the LaRouche movement and promoted primarily by current and retired hacks for the tobacco industry, this claim has become received wisdom throughout the US Republican party and its offshoots, and has deceived quite a few people, including writers for the NY Times.

Maybe the DEA should be in charge of the war on terror. Operation Raw Deal has been successful in arresting 120 people and closing 56 labs worldwide for illegal steroid production. Isn't that interesting? The world can't get together with a comprehensive plan to capture or prevent terrorists, but they can get together to stop steroid drug use. Priorities, priorities.

-- DEB
Here we are, at least in this part of the world, at the beginning of a new academic year. Teachers everywhere are facing the prospect of groups of sullen silent students, or groups composed of the cowed majority plus one ignorant loudmouth who you can’t shut up. And then there’s the group which works absolutely fine but when those ten file out, and another ten sit down, and you do exactly the same thing but nothing happens, long silences, etc. And then there’s the temptation to overcompensate and turn those seminar groups into a mini-lecture where you do all the talking.

So Mary Winkler, the woman who shot her husband, Matthew in the back has been granted supervised visits with her children by a judge.

Not only will this murderess get supervised visits with the kids, but now her enabling community has provided her with some goodies, just to show their support!

Ever since the nineteen-fifties, American universities and the idea of intellectual freedom have been under attack from two kinds of anti-intellectualism. On the right, the McCarthy era created a blueprint for landing devastating political blows by ridiculing the patriotism, the manliness, and the common sense of those inherently comical figures known as liberal professors. On the left, beginning in 1964 with, ironically, the Free Speech Movement at Berkeley, the campus became a political battleground where large numbers of students decided that only certain ideas—ones they liked—deserved a hearing, and that the group identity and political bona fides of a speaker mattered more than the quality of his argument.

This history evolved into new forms but never died. It helped create the New Left, the New Right, multiculturalism, political correctness, and the conservative media empire. The events at surrounding the appearance of ’s President Mahmoud Ahmadinejad . . . put it on full display.