How many Lives Does O.J. Have Left? 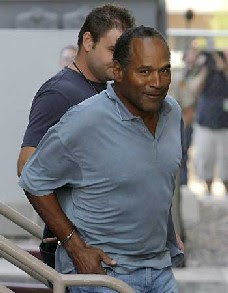 It is said that cats have nine lives. The question of the moment is how many O.J. Simpson has.

By my reckoning, The Juice has squandered four lives so far:

Lives One and Two got used up when he skated following the so-called Trial of the Century for the murders of his former wife, Nicole Brown Simpson, and Ron Goldman.

Life Three concluded with a $33.5 million wrongful death civil judgment against him, little of which he has paid.

And he left behind Life Four when he walked out of a Las Vegas courtroom this afternoon after posting $125,000 bail in connection with the armed robbery of two sports memorabilia collectors at a casino-hotel last week.

The Heisman Trophy winner and former ad pitchman and B-movie actor stood in court in a blue jail uniform and handcuffs. He furrowed his brow as the judge read the list of charges against him.

Simpson answered quietly in a hoarse voice and nodded as Justice of the Peace Joe Bonaventure Jr. delineated the restrictions for his release. He did not enter a plea but his attorney, Yale Galanter, said he would plead not guilty.

Galanter said after the hearing that the $125,000 bond was reasonable and had already been arranged.

The latest incident involving Simpson, who has had comparatively minor brushes with the law in Florida since he moved there after the double-murder trial, quickly became a media circus.

Among the talking heads were Marcia Clark, who is reporting for Entertainment Tonight.

Clark prosecuted Simpson for the 1994 murders and with help from a key homicide detective who perjured himself and was outted as a racist, among other factors, turned what many legal observers saw as an open-and-shut case of guilt into a victory for Simpson and his "Dream Team" of defense lawyers, who included two legends of the American defense bar — Johnnie Cochran and F. Lee Bailey.

Simpson, who looks every bit his 60 years, was arrested Sunday after a collector reported a group of armed men had charged into his hotel room at the Palace Station Casino-Hotel last Thursday and took several items that Simpson claimed belonged to him.

Given Simpson’s history, that remains to be seen.

The Los Angeles Times reported that Tom Riccio, the man who arranged the meeting between Simpson and the two collectors, has an extensive criminal history from the 1980s and ’90s, including grand larceny in Florida, possession of stolen goods in Connecticut and receiving stolen property in California.

Riccio claims that he has been promised some form of immunity by prosecutors.

The memorabilia taken from the hotel room included football game balls signed by Simpson, Joe Montana lithographs, baseballs autographed by Pete Rose and Duke Snider and framed awards and plaques, together valued at upwards of $100,000.

Police say four other men were with Simpson, although he is considered to be the ringleader. Two have been arrested and two are at large.

"I’m not going to lie to you, I do feel a little bit of elation to see him in handcuffs,” she said. “I hope that in some way the pressure that we put on him for the last 13 years drove him to this."

More here.
Posted by Shaun Mullen at 4:10 PM
Email ThisBlogThis!Share to TwitterShare to FacebookShare to Pinterest

Good stuff, OJ be going down at last; after the upcoming circus that is...
.
absurd thought -
God of the Universe says
KILL your wife

deny it then write book
showing how you would do it


absurd thought -
God of the Universe says
acquit a murderer

his race should not matter
simply ignore evidence
..