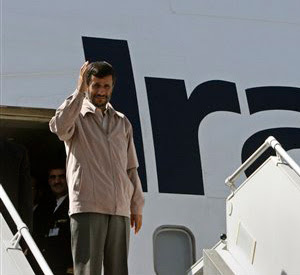 Given the kerfuffles over whether Mahmoud Ahmadinejad should be allowed to visit Ground Zero and questions over whether there is something strange in the drinking water at , it has been easy to overlook that as the Iranian president makes his annual sojourn to the U.S. and the U.N., he arguably has played the fools in the White House . . . for fools.

Put aside for a moment that Ahmadinejad is a bully of the first water and a Holocaust-denying loony tune who has some very real problems back home, as well as the fact that he learned to his dismay when he did finally speak at Columbia that freedom of speech is a two-way street. (Ha!)

Because there is ample evidence that the U.S. may be the only thing propping him up.

No bout adoubt it, Ahmadinejad is winning the public-relations war against a strident Bush administration, which when not off message is sending mixed signals to Tehran, the Middle East and the world at large.

Now glom onto what Peter Galbraith has to say in the New York Review of Books on the 's train wreck of an policy:

"The scale of the American miscalculation is striking. Before the Iraq war began, its neoconservative architects argued that conferring power on Iraq's Shiites would serve to undermine Iran because Iraq's Shiites, controlling the faith's two holiest cities, would, in the words of then Deputy Defense Secretary Paul Wolfowitz, be 'an independent source of authority for the Shia religion emerging in a country that is democratic and pro-Western.' Further, they argued, could never dominate , because the Iraqi Shiites are Arabs and the Iranian Shiites Persian. It was a theory that, unfortunately, had no connection to reality."

While we’re piling on, there is this from Barnett Rubin at Global Affairs:

"The Bush-Cheney administration has surrendered much of to the Taliban and much of to al-Qaida. They have turned most of Iraq over to Iran, creating the very danger over which they now threaten another disastrous war; they have strained the U.S. Armed Forces to the point of exhaustion, turned the Defense Department over to private contractors, the Justice Department over to the Republican National Committee, and the national debt over to foreign creditors, while leading a party whose single most basic belief is supposed to be that individuals must take personal responsibility for their actions.

"And they dare to lecture us on national security?"

Indeed, there is nothing that the White House has said and done -- from deliberately leaking news of inner sanctum deliberations over whether to launch air strikes against Iran to its refusal to engage in dialogue with it except in the rarest of circumstances -- that has cowed, let alone deterred Ahmadinejad.

Conceptually, worse than all the losses to America from the criminal incompetence of Kristol/Bush/Cheney etc was that they set out to enthrone Chalabi as the new 'Palme d'orian' Iraq leader. It turned out that he is thick as thieves with Iran and simply 'played' these guys. I mean, like, if their plan had come to fruition we would have been even worse off. It boggles the mind.

If Peter Galbraith would have an important job in a Hillary Clinton Administration, I might be willing to vote for her.