Disorders From Around Yon Blogosphere 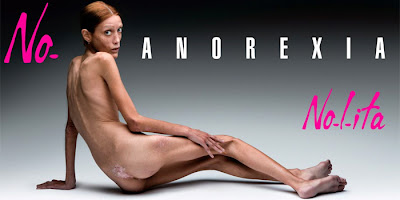 A controversial ad campaign featuring a 68-pound anorexic woman has been launched in Italy to coincide with Milan Fashion Week.

The ads, which are aimed at raising awareness about eating disorders, feature Isabelle Caro, a 27-year-old French woman.

Caro, who has battled the disease for 15 years, shows her exposed breasts and frail, naked body. Another image shows Caro's buttocks and the outline of her protruding rib cage.

The images, which have been placed in newspapers and on billboards, are being used to advertise Flash & Partners' clothing brand Nolita.

The issue was brought to the forefront after the starvation-related deaths of South American models Ana Carolina Reston, 21, and sisters Louisel and Eliana Ramos.

Last year, super-skinny models were banned from Madrid Fashion Week. The ban covers girls with a body mass index of below 18 -- 18.5 to 25 is considered to be "normal."

In Milan, models must now carry medical certificates to prove they are healthy.

The head of the Catholic Church in has told the BBC he believes some European-made condoms are infected with the HIV virus deliberately.

. . . "Condoms are not sure because I know that there are two countries in , they are making condoms with the virus on purpose," he alleged, refusing to name the countries.

"They want to finish with the African people. This is the programme. They want to colonise until up to now. If we are not careful we will finish in one century's time."

A fascinating thing happens when you're male and you hit your 30s and you're still single.

It's almost like God says "I know you have to deal with man boobs, hairs growing out of your nose and young punks wearing their sister's cardigan pushing in at bar - I'll throw you a bone."

So, instead of being the hunter in the dating game, you become the hunted; females your age transform from creatures to be pursued, wooed and cajoled into the bedroom to stalking, winking, white-wine drinking wild-women who are up for anything with an eligible bloke.

Mother nature is particularly unfair to her daughters and it's about age 32 that many women realise life's grand game of musical chairs is cruelly weighted towards guys and there's not many seats left to sit on.

It is at this moment that 'The Flip' occurs and the balance of power in the dating world shifts irrevocably in the man's favour.

There appears to be a growing happiness gap between men and women.

Two new research papers, using very different methods, have both come to this conclusion. . . . In the early 1970s, women reported being slightly happier than men. Today, the two have switched places.

. . . Over the same span, women have replaced housework with paid work — and, as a result, are spending almost as much time doing things they don’t enjoy as in the past. Forty years ago, a typical woman spent about 23 hours a week in an activity considered unpleasant, or 40 more minutes than a typical man. Today, with men working less, the gap is 90 minutes.

[Sophie] Currier already has received special accommodations under the Americans with Disabilities Act for dyslexia and attention deficit hyperactivity disorder, including permission to take the test over two days instead of one. The [National Board of Medical Examiners] also offered her a separate testing room where she can express milk during the test or during break time, and the option to leave the test center to breast-feed during break times.

They say cancer-causing chemicals could build up in the prostate if men do not ejaculate regularly.

And they say sexual intercourse may not have the same protective effect because of the possibility of contracting a sexually transmitted infection, which could increase men's cancer risk.

Posted by Shaun Mullen at 4:31 AM
Email ThisBlogThis!Share to TwitterShare to FacebookShare to Pinterest