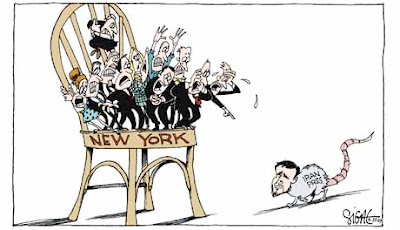 One of the more puzzling traits of the right wing, which waves Old Glory at every opportunity and professes to have a deep and abiding love for America, is how little faith it actually has in the pillars of the American legal and political system when push comes to shove.

In the wake of the 9/11 attacks, the right wing has slavishly supported the Bush's administration's efforts to suspend habeas corpus, secretly spy on the citizenry, ignore international treaties and promote the use of torture, to name but a few of the pillar-busting laws and policies that the White House has shoved down our throats with the help of a compliant Congress. This even though the legal system the Founding Fathers . . . er, founded has withstood over 200 years of war, depression and pestilence just fine, thank you.

This bring us to another piece of Founding Father handiwork -- freedom of speech -- and the howls of protest from the right wing (as well as a bunch of other folks) when Iranian President Mahmoud Ahmadinejad was invited to speak at Columbia University.

Despite calls for his head, university President Lee Bollinger turned out to not be "a craven boot-licker of tyrants," as one conservative blogger put it, but an exemplar of the notion that freedom of speech is a two-way street.

That conservative blogger is Gerard Van der Leun, who in an apologia at his American Digest, writes that the reality of the appearance of "the dwarf Hitler" at was very different than he had anticipated.

What Gerard said is worth excerpting at length:

Ahmadinejad] was forced to listen to Bolllnger's carefully phrased, utterly devastating catalogue of his evil acts. This is something you can bet he has never had to endure before. To him, it was deeply and personally insulting. The only way it could have gotten worse would have been if Bollinger walked across the stage and spit fully into his face.

"Long, long after all the too and fro about Columbia and Bollinger fade, the clip of the dwarf proclaiming 'We have no homosexuals in Iran' will endure and will be used to revile and denigrate this corrupt and disgusting regime. It may well, over time, cause many people, gay or straight, to reconsider a knee-jerk support for simply because it opposes George Bush and the . It will be invaluable. It already is enshrined in the Pantheon of Lies and it will only grow in stature there. It is a major propaganda victory.

None of this could have happened if Bollinger and had not exercised their right to invite whom they wish to speak on campus. Spare me the plaints about who they do and do not invite and who they disinvite. That is not relevant to this issue. What they did in the past and what they may do in the future does not in any way diminish the effectiveness of what happened today. Spare me to the lame excuse that Bollinger only did it because of "the criticism." You have no means of knowing that other than inside your own imagination. And even if it were the case . . .So What?

oday, to be brief, freedom of speech worked as it should work. It revealed the truth."

A cascade of casual happy laughter was the result, on video replays, when Ahmadinejad uttered his "We don't have homosexuals ..." line.

Akin to Sean Hannity and Ann Coulter, Ahmadinejad has more than a passing resemblance as a cartoon character.

Listening to him one might well have been watching an episode of 'South Park', hence the gaiety latent in the laughter.