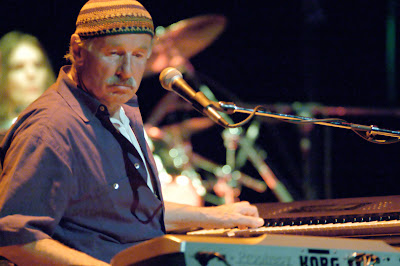 Joe Zawinul, the classically trained pianist and composer who achieved fame after he plugged in and became a co-leader of Weather Report, died Tuesday of skin cancer. He was 75.

An exemplary electric pianist, Zawinul also was one of the relatively few players of the synthesizer when it first became popular in the 1970s to break out from the monotonous noodling of most players.

Zawinul, a native of , cut his jazz teeth as a member of saxophone great Cannonball Adderly’s band in the 1960s and penned "Mercy, Mercy, Mercy," Adderly’s biggest hit.

His next stop was with Miles Davis, for whom he played electric piano on "In a Silent Way," the title track of which Zawinul wrote. He also played keyboards and composed for ’ next album, "Bitches Brew," the trumpeter's breakthrough jazz fusion offering.

Weather Report, a jazz fusion band that he led with saxophonist Wayne Shorter, exemplified the best of that controversial genre and was at its greatest when legendary electric bass player Jaco Pastorius toured with the ensemble in the late 1970s. Zawinul composed “Birdland,” the international hit, while with the band.

He had toured with his Zawinul Syndicate band for the past 20 years.