Iraq: The U.S. Bites Itself In the Ass Again 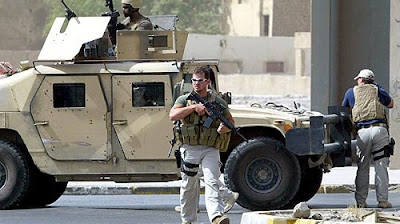 (UPDATE: CNN reports that Blackwater employees will return to work in Iraq on Saturday. End of kerfuffle.)

The intrinsic half-assedness of virtually everything associated with the planning and execution of the war is on full display in the raging controversy over Blackwater .

Let me hasten to say that the military, despite sometimes crossed and changing signals from the White House and Pentagon, has comported itself with the utmost professionalism. But the latest consequence of the Bush administration’s make-it-up-as-we-go-along approach to war is that the U.S. Embassy in has indefinitely barred diplomats and other civilian government employees from traveling by land vehicle outside the heavily protected Green Zone. Also barred are CIA agents who are trained to kill with a ballpoint pen but apparently can't take a wee-wee without some Blackwater goon holding their . . . oh, never mind.

This is the Green Zone that somehow keeps coming under attack from insurgent fire despite the much-vaunted successes of the surge. The area outside the Green Zone is where there are myriad infrastructure repair and improvement projects that investigations show somehow have been shoddily built and are rife with corruption, sometimes somehow because of the shady dealings of the politically-connected winners of no-bid contracts like Haliburton and Bechtel.

Blackwater, of course, is the North Carolina-based security company that somehow is a law unto itself. It is lead by a right-wing Christianist Republican fatcat donor whose spokespersons describe its work in in messianic terms and is nominally supervised by the State Department, which trots out fall guys when bad things somehow happen because of Blackwater's trigger-happy mercenaries.

These "somehows" are, of course, because of the make-it-up approach, which is a consequence of the larger reality that politics always have trumped policy in the Bush administration.

Which is to say the absence of the methodical planning that takes into consideration the military, cultural and legal aspects of an invasion and occupation that has been AWOL from Day One and remains so despite four-plus years into the war despite the myriad unpleasant consequences of being half assed.

These unpleasant consequences can take on a kind of circular, bite-your-self-in-the-ass dynamic.

A terrific example is the incident last weekend in which Blackwater bodyguards killed at least eight Iraqis. The Iraqi government has concluded that they did so without provocation and is calling for Iraqi companies to replace the dozens of foreign security companies and that a law that has given the companies immunity be scrapped. Meanwhile, a U.S. investigation continues.

And so at a time when the focus of the American effort is reaching out to tribes outside of Baghdad and local leaders in the capital, diplomats and other officials sit in front of their computers in the Green Zone playing solitaire because no one from the Oval Office on down took seriously the implications of letting loose a bunch of trigger-happy U.S. mercenaries on the Iraqi people.

And at a time when there are reports of how safer everyone is in Iraq, these rosy pronouncements are drowned out by news stories about those trigger-happy U.S. mercenaries and how the rift between the occupiers and occupied in reality grows ever wider.

Posted by Shaun Mullen at 4:21 AM
Email ThisBlogThis!Share to TwitterShare to FacebookShare to Pinterest

The story's told that once upon a time George Bush, Rummy and Darth Vader happened to visit a Mosque at evening prayers.
Rummy turns to Cheney and says, "Why does the President seem so happy?"
Cheney faintly lights up his malicious leer and says, "He thinks they're repeating ally, ..ally."

Ah yes Blackwater,not one of our better Outer Banks Exports...

My tax dollars at work... hiring mercenaries, wonderful... Think I will have to drive up there and protest.

I just have some small issues with apocapalyptic types running anything in a war zone in the Middle East.