Bush & the Dems: A Tale of Two Mandates 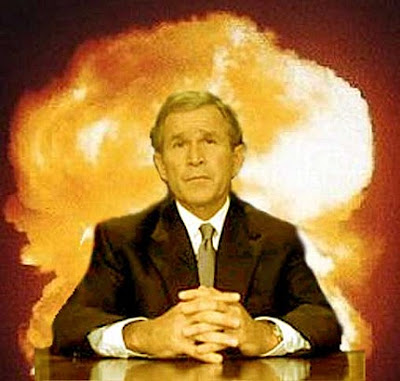 You have to go all the way back to Richard Nixon’s infamous 1973 “I am not a crook” speech to find a presidential address that is being made under circumstances so incredible as those when George Bush addresses the nation tonight.

Bill Clinton’s 1998 "I did not have sex with that woman" speech was ignominious, but hardly comparable.

Nixon turned a third-rate burglary at the Democratic National Committee headquarters into a constitutional crisis that would lead to his resignation, while Bush has visited a catastrophe on a third-rate dictatorship – and – that makes the tumultuous events of the Watergate era seem quaint.

Just as few people believed Nixon when he swore his innocence, few people will believe Bush.

While the president will not be standing on the deck of an aircraft carrier and in front of a "Mission Accomplished" banner, and although in six subsequent "major" speeches on the Iraq war over the last four years he has repeatedly shifted the rationales for the invasion and occupation as one after the other has been discredited, he will yet again declare that success is at hand although the evidence is overwhelmingly to the contrary.

While reaction to this latest speech will be muted at home, there will be belly laughs in Moscow and Beijing, as well as the terrorist enclaves of tribal Pakistan -- and more tears shed by the families of the nearly 4,000 men and women at arms who have died in the war.

There has been a modest spike in Bush’s approval ratings because of positive publicity about the surge strategy, as opposed to quantifiable results from it. But with only a tiny minority of Americans telling pollsters that they believe Bush is capable of administering the war and barely a majority supporting General Petraeus, there are very few minds to be changed.

The speech, as they always are, will be devoid of calls for sacrifice at home and absent of candor.

There will be no direct reference to the elephant in the room -- an inept and corrupt Baghdad government that has failed to meet every benchmark of consequence set by its White House puppeteers, including a U.S.-crafted law governing the division of Iraq's vast oil riches that now appears dead after negotiations collapsed.

Beyond more bloodshed, a perverse consequence of the president's open-ended extension of the surge is that it sends a clear message to the Al Maliki regime that the pressure to work toward national reconciliation -- which is necessary if military gains are to be sustained -- is off. Its American helpmates, who are busily arming both sides in the civil war, won't not be leaving anytime soon.

What is being billed as an address to a war-weary nation in reality will be an appeal to congressional Democrats to not get in the way of a blank-check commitment to war that will last well into the next (probably Democratic administration) if not beyond. That appeal will be paraded in drag, which is to say dressed as a gradual but limited withdrawal that after a year may merely return troop levels to where they were before the surge.

The president need not have bothered to speak.

Despite some sharp questioning of Petraeus and Ambassador Crocker regarding their claims of progress by senators on Tuesday after an utterly lame performance by House members on Monday, Democrats have neither the votes nor the will to face down the president. And like the president, who squandered his post-9/11 mandate, they have squandered theirs.

You nailed it Shaun. I'll bet it is the least watched speech of his Presidency. Question of the day, "If this President speaks during Prime time, will anyone outside the media be listening? Answer No!

The media gives him too much attention and coverage he doesn't deserve. It makes me sick that he uses the media to promote his nonsense and the media complies. I would love to see a major outlet not carry his message and not even refer to it in their news segment. Now that would be a headline story!

U.S. National Interest in Iraq left Undefended?
.
We and the Brits have left the oil rich part of Iraq and its vital international port for shipments, i.e. the most important part of Iraq, to Iranian influenced warring bands of Shiites.
Elsewhere our troops are attacked one hundred and seventy five times a day.
(177.8 attacks a day on troops Reuters 7.20.07)

What in the holy christ are we exactly doing there? Defending the contractors in non National Interest territory???

If we're staying in Iraq in such force to defend the Emerald Palace when we've already lost control over most areas of strategic interest, that's like defending your ego when you're in quicksand. Or like getting a boob job with the last of your cash when the Doc says you've got cancer.