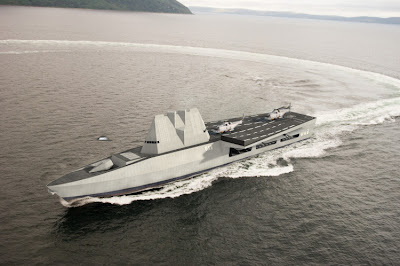 Elementary chaos theory predicts that robots will inevitably rise against their masters. So why this?

Here's the UXV Combatant, a new class of warship being developed by BAE Systems to fight in the drone wars. BAE believes that the future battlefield will be full of intelligent robots fighting against each other, probably until they realize they can join together to eliminate all humans from Earth. The ship looks and specs, expected to enter service past 2020, look terrifying.

[Laura Bush] said she was moved by a tiny picture she saw of Aung San Suu Kyi - the Burmese pro-democracy leader and Nobel Peace prize laureate - who came to the gate of her home, where she is under house arrest to greet monks who were allowed to pass by there earlier this week. Mrs. Bush spoke of Aung San Suu Kyi's long years under house arrest, noting her husband died in , while she was confined to her home in . . . .

"There is hope - absolutely, there is hope for ," Mrs. Bush said. "And, I think that is one of the feelings we all get as we look at these images - this very cautious hope that, this time, the people have turned a page." Mrs. Bush said the Burmese have told the world they can no longer tolerate oppression, and the nation must move on.

Can a Republican win the '08 presidential nomination by assailing his own party?

Mitt Romney apparently seems willing to take that gamble. And it would appear to be a risky tactic.

Despite the fact that the Republican "brand" is at low ebb nationally, and despite the fact that the lame-duck Republican president has been written off as an irredeemable failure by roughly 70 percent of the American public, GOP loyalists would prefer not to dwell on their past errors, or question their leader's wisdom; rather, they'd prefer that their '08 candidates simply serve up heapings of red meat about defeat-o-crat Democrats and the perceived evils of Hillary.

But Romney, perhaps with an eye on the Bush-weary independent voters who will ultimately swing the general elections, is now taking a different route. In a new national TV ad, in a weekend speech, and in a widely-circulated "open letter" to fellow Republicans, he has decided (at least for now) to position himself as the "outsider" and "reformer" who will clean up the failed Washington Republican establishment. And the riskiest aspect of this move is his subliminal skewering of the Decider himself.

It would be hard to find a more worthless administration tool than Diane Feinstein. From gutting FISA to funding the war without restrictions, this so-called Democrat cries "how high?" anytime Bu$hCo says jump. She voted to extend the Patriot Act without the critical safeguards that real Democrats wanted. She voted for what amounts to a declaration of war on . She was instrumental in sending a corporate shill to the Senate floor for a 5th Circuit confirmation vote. She condemns the free speech rights of MoveOn.org and our troops to endless combat without relief.

Even a Republican apparatchik, appointed by the governator, would be better than a woman who at every turn demonstrates contempt for her constituents. At least then there would be no expectation of true representation.

So . . . Senator Feinstein . . . could you please just retire. You're an embarrassment -- a liability for your state and your party.

It was beef and almonds. The whole time we were fussing about the Chinese government’s failure to impose strict standards on production of toys and Mattel was recalling toys because of lead paint and other manufacturing deficiencies, (some of which Mattel now acknowledges were design flaws) the Commission of the European Communities was quietly taking action against the United States because of almonds, and the South Koreans were banning some U.S. cows.

Although the almonds were, like some of the parts of the recalled toys, small enough to be swallowed by infants with the result that they might choke, they were not recalled because of their size. Nor were they coated with lead paint like the toys produced in . Indeed, the almonds have not been recalled. They are still being sold in grocery stores all over the and will continue to be sold in those places for the foreseeable future.

The trouble with almonds, as far as the Commission is concerned is the aflatoxin levels in their production and processing and the fact that there are inadequate controls in the to insure that the almonds that reach meet Community standards. It was a bit of an embarrassment but then, much of what we do is. Not properly processing almonds is a much smaller problem than many of the others confronting the administration.

Posted by Shaun Mullen at 4:31 AM
Email ThisBlogThis!Share to TwitterShare to FacebookShare to Pinterest