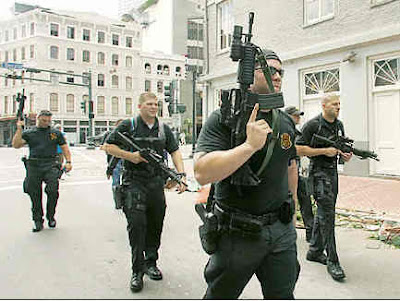 ALL IS FORGIVEN, LADS
Horror stories involving Blackwater USA in Iraq are stacking up like bodies in the Baghdad central morgue, and the bottom line is always the same:

Employees of the North Carolina-based security company can kill without consequence.

I wrote back to back to back to back posts last week on Blackwater only to see the story whimper to an end with a resumption of activities by the company a few days after its bodyguards blasted at least eight Iraqis to Kingdom Come apparently without provocation.

I am so Blackwatered out that the mere mention of the name threatens to give me heart palpitations, but then I read this dispatch from Michael Hirsch at Newsweek:

"Take the case of the Blackwater guard who got drunk at a Green Zone party last Christmas Eve and reportedly boasted to his friends that he was going to kill someone. According to both Iraqi and U.S. officials, he stumbled out and headed provocatively over to the 'Little Venice' section, a lovely area of canals where Iraqi officials live. He had an argument with an Iraqi guard, then shot him once in the chest and three times in the back. The next day Blackwater put him on a private plane out of the country . . . "

Oh, by the by, the Iraqi government says it has a videotape of the shooting incident that triggered last week's kerfuffle. But it but has dialed back the rhetoric because . . . well, because a security vacuum would result if Blackwater were forced out, that would mean troops would have to be pulled from the surge to babysit diplomats, which would mean . . .

Did Secretary of Secretary of State Rice or Prime Minister Al-Maliki bring up Blackwater when they crossed paths this weekend at the U.N.? Nah, they avoided each other like the plague.

The White House has been infamous for not talking to its enemies, but now it's even avoiding its friends.

Hat tips to Sarabeth at 1115 and Avedon Carol at The Sideshow
Posted by Shaun Mullen at 5:19 AM
Email ThisBlogThis!Share to TwitterShare to FacebookShare to Pinterest