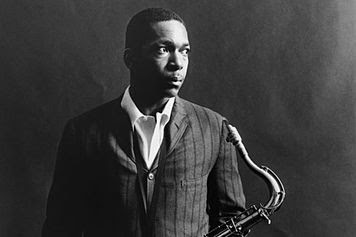 
* * * * *
We celebrate what would have been John Coltrane's 81st birthday today with the annual outpouring of tributes and remembrances. This is mine:


I had listened to classical music that moved me in emotional and intellectual ways I hardly understood, stuff like Beethoven's "Pastoral" and Dvorak's "From the New World," both part of a boxed set purchased at an old A&P supermarket with money from my newspaper route.

While I had a budding affinity for jazz, it ran toward the Great American Songbook singers, notably Ella Fitzgerald, and bandleaders like Dave Brubeck and Benny Goodman. I enjoyed their music, but these comparatively square bears didn't move me. When I returned home from New York and put "My Favorite Things" on the turntable of my dinky RCA hi fi, I was moved.

I didn't know that Coltrane was playing in a style called "sheets of sound," let alone that he was grasping something called a soprano saxophone in his massive hands in the dust jacket photo, an all but obsolete instrument that he had taken up because it was less painful for his diseased gums to play than his old standby and meal ticket, the tenor sax.

Some people claim that Coltrane began using LSD about this time, and there is indeed an acid-like transcendence to his music he played, much of it with new wife Alice (who died in January) on piano and Pharoah Sanders on tenor sax.

* * * * *
I never saw Coltrane play. Probably the closest I ever got to him was when I took my draft board physical a few blocks from the three-story brick row house on North 33rd Street in the Strawberry Mansion neighborhood of Philadelphia that he bought for $5,400 in 1952 and practiced and lived in until his death.


Then there's that ebony soprano sax in the dust jacket photo.

* * * * *
This is another in a series of musician appreciations. Previous appreciations include those on Jerry Garcia and Bob Marley.

I learned to appreciate Coltrane (a little, I never knew enough to really appreciate jazz the way it should be appreciated) as a kid in my dad's house. His unbelievable record collection was the envy of the neighborhood, and he knew the ins/outs of just about anybody who played jazz.

Sadly for him, his daughter grew up to appreciate rock & roll and opera, but still doesn't quite get jazz.

You don't have to get it. Only dig it.

Mine? "Giant Steps" I think.

Obviously, I never saw Coltrane (too young), but did have the fortune of seeing Miles Davis a couple of years before he passed away. Though at the time he was mostly doing fusion, so it wasn't at all like a performance one would have caught in the 50s.

On the other hand, I once lucked into a set by Terrance Blanchard and his quintet at a club in D.C., and since this was fairly early in his career, it was a very intimate setting--very much like I imagine it might have to see one of the greats play in their heyday.