It Takes Lotsa Chefs to Cook These Books 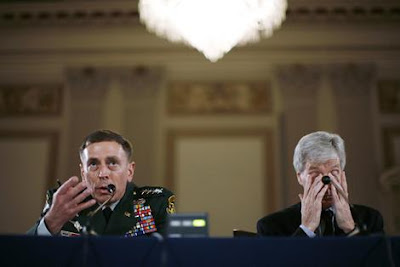 Shocking at it may seem, the civilian casualty figures that General David Petraeus used in his Iraq war progress report dog-and-pony show earlier this month differ from the generally higher numbers less partisan body counters use. But what's really interesting in a grotesque sort of way is that the general's numbers also differ significantly from the Pentagon's official numbers, which are higher in some cases and lower in others.

Now before we impugn this whole crowd for having nefarious motives, of which there no doubt are some, let's note that compiling wartime statistics always is tough and is all the more so in Iraq because of the prevalence of sectarian killings. Which begs the question: Just what is a sectarian killing?

The answer, it would seem, is elastic.

Writing in the WaPo, Karen DeYoung offers this sobering example:

"On Sept. 1, the bullet-riddled bodies of four Iraqi men were found on a street. Two days later, a single dead man, with one bullet in his head, was found on a different street. According to the military in , the solitary man was a victim of sectarian violence. The first four were not.

Such determinations are the building blocks for what the Bush administration has declared a downward trend in sectarian deaths and a sign that its war strategy is working. They are made by a specialized team of soldiers who spend their nights at computer terminals, sifting through data on the day’s civilian victims for clues to the motivations of killers."

Then there is the range of available statistics.

To cite but one example, Petraeus cherrypicked civilian deaths only for his presentations, while Dan Macomber, a chief warrant officer who is in charge of the Multi-National Force's sectarianism database, counts both civilians killed and wounded, which surely provides a more comprehensive picture.

But this, according to DeYoung, is where it gets interesting:

"In recent months, most of the military's indicators have pointed in a favorable direction. As with all statistics, however, their meaning depends on how they are gathered and analyzed. 'Everybody has their own way of doing it,' Macomber said of his sectarian analyses. 'If you and I . . . pulled from the same database, and I pulled one day and you pulled the next, we would have totally different numbers.'

"Apparent contradictions are relatively easy to find in the flood of bar charts and trend lines the military produces. Civilian casualty numbers in the Pentagon's latest quarterly report on Iraq last week, for example, differ significantly from those presented by . . . Petraeus, [whose] numbers were higher than the Pentagon's for the months preceding this year's increase of U.S. troops to Iraq, and lower since U.S. operations escalated this summer."

Ilan Goldenberg is less circumspect, asserting at Democracy Arsenal that a major difference between Petraeus' numbers and the Pentagon numbers is that the general has taken what he asserts is the best available U.S. casualty data and blended it with Iraqi data that is notoriously unreliable.

DeYoung does not say that the numbers are being cooked, but does note that:

"The U.S. intelligence community considers more than numbers in making its war assessments. 'What the Iraqis perceive' about their country and their daily lives 'may be more important than what the numbers are,' said a senior intelligence official . . . Even so, he said, intelligence officials found contradictions in the available statistics as they wrote last month's National Intelligence Estimate on Iraq, whose conclusions were somewhat less optimistic than the military's. . . .

"While both Petraeus and the recent Pentagon report emphasized improved statistics over the past three months, the intelligence community generally declines to declare trends based on data measured in periods shorter than six months to a year. Several senior intelligence officials said last week that most numerical indicators appear to be moving in a uniformly positive direction in the nearly two months since the intelligence estimate's data cutoff -- although they said it is too early to determine definitive trends."

Alas, it will be something of a miracle if the men and women under Petraeus's command can keep that "uniformly positive direction."

An inept and corrupt Baghdad government that has failed to meet every benchmark of consequence set by the White House got a go-free card from President Bush in his prime-time speech following the appearances by Petraeus and Ambassador Crocker on Capitol Hill.

The president's open-ended extension of the surge sends a clear message to the Al-Maliki regime that the pressure to work toward national reconciliation -- which is necessary if modest military gains are to be sustained -- is off because its American helpmates, who are busily arming both sides in the civil war, won't not be leaving anytime soon.

Then there is the feckless Al-Maliki himself, who actually had the temerity to claim earlier this week that his government had prevented a civil war that in point of fact has been raging for a year and a half.

I guess Shiites and Sunnis will just have to reconcile on their own. If they aren't killed trying as were representives of both sects in a bombing in Baquba yesterday.

Photograph by Reuters
Posted by Shaun Mullen at 5:41 AM
Email ThisBlogThis!Share to TwitterShare to FacebookShare to Pinterest

Things are bad, but they could be worse. Maybe he did prevent a civil war. Why is it that nobody ever writes on their blog that they have no idea what's going on? Everybody's got a pretty clear picture. It's just that everybody's got a different picture.

At any rate, I would never have the temerity to claim that someone was feckless. Perhaps he was really being feckful, but nobody could get the evidence.