O.J.: That Was The Thursday That Was 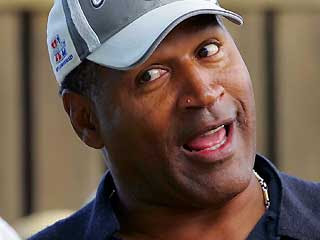 O.J. Simpson had himself one helluva Thursday.

Earlier yesterday, Fred Goldman kicked off a coast-to-coast tour to pitch “If I Did It” on the Oprah Winfrey Show.

Goldman’s son Ron is widely believed to have been murdered by Simpson along with his former wife, Nicole Brown Simpson.

Dad was awarded the right publish the Juice's ghostwritten non-confession confession in bankruptcy court as a consequence of his decade-long battle to force Simpson to help satisfy a 1997 $33.5 million wrongful-death civil judgment (now up to $38 million with accrued interest).

Simpson, who was named as a suspect today, acknowledged going to the room to get property he said was stolen from him but denied breaking in.

He told The Associated Press that auction house owner Tom Riccio called him several weeks ago to say some collectors “have a lot of your stuff and they don’t want anyone to know they are selling it.”

Simpson, who was in Las Vegas for a friend’s wedding, said he arranged to meet Riccio at the hotel and conducted a “sting operation.”

“Everybody knows this is stolen stuff,” Simpson said. “Not only wasn’t there a break-in, but Riccio came to the lobby and escorted us up to the room. In any event, it’s stolen stuff that’s mine. Nobody was roughed up.”

Not coincidentally, Simpson’s stock-in-trade since the murders has been selling his considerable sports memorabilia collection, including his Heisman Trophy, in order to maintain his lifestyle (golf by day, party by night) and keep creditors off of his back. The trophy sold for $255,500 in 2006.

The former NFL star, TV commercial pitchman and not-half-bad movie actor had been scheduled to give a deposition today in in a bankruptcy case involving his eldest daughter. But it was canceled because Simpson had told attorneys that he would be out of town.


Photograph by The Associated Press
Posted by Shaun Mullen at 5:20 AM
Email ThisBlogThis!Share to TwitterShare to FacebookShare to Pinterest