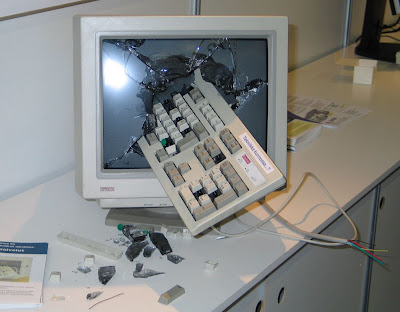 The Internet is truly a seductive place. It is the 18-year-old blond hard body with legs that don’t quit, swishing through a lunchtime crowd of 40-something paunched, balding, married men wishing they didn’t have two kids, a wife with a headache every night, and a mortgage to rival the national debt. With a flick of her hip, the seductress will whisk them all away to some place where they don’t have to pick up the dry cleaning on the way home from work or take the kid to soccer practice. Instead, our middle-aged Lotharios imagine themselves… (Insert current fantasy here.)

The Internet does that, of course. It seduces our senses, placing us smack in the middle of history, a “This is ,” Murrowesque reality on steroids where we can change the scenery simply by clicking the mouse. To those of us who grew up in a world where the grainy, black and white images of far away places were broadcast on one of only three television networks, it truly is magic – something those who have lived with the sorcery for most of their lives will never understand.

"I was suddenly in love. It was amazing. We seemed to be stuck in the same kind of miserable marriage," said Sana Klaric, 27, who found out that the anonymous stranger she was chatting up on the Internet was her husband. They're now divorcing.

PROBLEM: My device will not turn on.

PROBLEM: Was I not clear? The device will not start.

SOLUTION: The battery may be dead. Replace only with battery number 3BX-1267, available for $29.95 from your authorized equipment dealer. Use of any other battery may result in damage to your equipment and will void warranty.

PROBLEM: I have replaced the battery, and the device still does not work.

SOLUTION: Try holding down the CTRL, DEL, OPTION, RE-SEND and ESC keys simultaneously while pressing the ON button. If this doesn't work, use a fine-pointed pencil to press the RESET button, which is located in a tiny hole on the back of the device.

PROBLEM: My pencil point broke off in the RESET hole. The button appears to be jammed.

SOLUTION: You have just voided the warranty. Try using a paper clip.

SOLUTION: The problem may be a faulty fuse. The fuse is located inside the device housing adjacent to the battery compartment. DO NOT ATTEMPT TO OPEN THE HOUSING. This can result in electric shock and will void warranty. Take device to an authorized dealer for fuse replacement.

PROBLEM: There is no authorized dealer within reasonable driving distance of my residence.

SOLUTION: Pack device in the carton it came in and mail or courier express to our factory maintenance facility, Box 2387-H, Kuala Lumpur, Malaysia. Allow eight weeks for fuse replacement and return. Include return shipping charges in Malaysian currency.

Two Arab-Americans have been hired to post on blogs and Internet forums in an effort to improve America’s image.

For quite a while, conservatives have embraced an annoying strategy -- trawl through liberal comments sections in the hopes of finding intemperate remarks. The right then takes these comments to "prove" that the left is made up of unhinged radicals.

The practice has always been rather self-defeating. In fact, about a year ago, Kevin Drum came up with a sensible maxim: "If you're forced to rely on random blog commenters to make a point about the prevalence of some form or another of disagreeable behavior, you've pretty much made exactly the opposite point." Eventually, the practice was even given a name: "Nutpicking."

Unfortunately, the practice seems to have spread. Instead of far-right blogs trolling through liberal comment sections for fodder, now Republican candidates for public office are doing it.

I got up this morning and noticed that my site pages were moving a little slow. Usually this means extra traffic. So I checked my site meter only to find that I had already had more hits before 9:00 o-clock in the morning than I do in an entire day. A further check revealed that all these hits were coming from a site called Instapundit. It seems that my man Glenn Reynolds will just post a link on his site, and his disciples will all drill on that site and basically do a bum rush on the site that Reynolds is linking. I think they call it an "Instalanche" or some shit. Which according to Wkipedia is a portmanteau for Instapundit avalanche. And quite a few of them were in the fields today. Just call Glenn Reynolds the Jimmy Buffet of the blogosphere, and call these people, "Parrot Heads". Or, as they call him, the "Godfather". Now black folks, if that's not some blasphemy for your ass I don't know what is. We all know the real Godfather's name is James and not Glenn.

But seriously, I thought it was all kind of ironic, since Reynolds (along with house Negro Lashawn Barber) was the person that pushed me over the edge to start a blog. I caught him on CSPAN one morning while I was having breakfast, and he was going on about how easy it was to start a blog, and how essential it was to share your thoughts, if you were a person with strong opinions. He was a person who also happens to be a member of my profession, which gave him a certain amount of credibility from where I sat. So a blogging I went, and the rest, as they say, is history.

Now with all due respect to Mr. Reynolds, and his Instalanche people, ( I wonder what they call themselves. I mean doesn't every group have a name? Think Kossacks for example) I think it would be nice if they maybe read some of the shit on the blog that they bum rush before they start making stupid ass comments about the host and the blog itself.