Blackwater USA: Onward Through the Fog 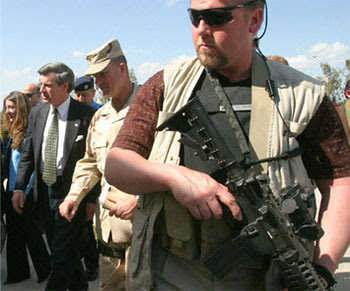 The fog surrounding a weekend incident in which Blackwater USA security guards allegedly killed at least 11 Iraqis and wounded others grows thicker.

There have been these developments:

* A preliminary review by Iraq's Ministry of Interior found that Blackwater security guards fired at a car when it did not heed a policeman's call to stop, killing a couple and their infant. The report said that Blackwater helicopters also had fired, a finding the North Carolina-based company denies.

* The bombing that Blackwater cited as the reason that its security guards fired was so far away from the scene as to not be a factor.

* The Iraqi Ministry of Defense said that 20 Iraqis were killed, considerably higher than the 11 dead reported earlier.

* Prime Minister Nouri al-Maliki said the shooting was "the seventh of its kind" involving Blackwater.

* diplomats were confined to the Green Zone for the second straight day. Blackwater provides security for high-ranking American officials, diplomats and their staffs.

* An earlier statement by the Iraqi Ministry of the Interior that Blackwater's license to operate was softened. It now appears that even if Blackwater is licensed, one of many points of contention, that license has been merely suspented.

* There were new calls for investigations into Blackwater's murky status, which apparently allows it to operate without impunity and outside of Iraqi, U.S. and international law.

The shooting has touched off a debate about American security companies, which were exempted from being liable for their actions by L. Paul Bremer, the head of the Coalition Provisional Authority while Iraq's government was still under American administration. The CPA was abolished the day after the order was issued.

Blackwater has about 1,000 employees in Iraq. There are about 48,000 security contractors in country overall, and 160,00o private contractors in all, more than the number of U.S. troops.

Posted by Shaun Mullen at 5:09 AM
Email ThisBlogThis!Share to TwitterShare to FacebookShare to Pinterest