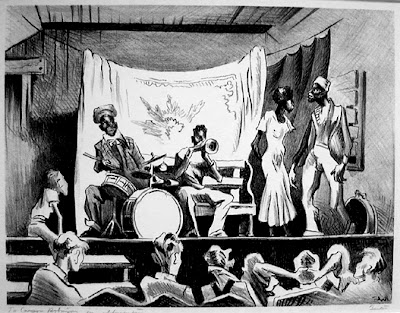 What better way for the GOP to burnish its image as the country club party than to have all its top presidential candidates blow off a long-scheduled, nationally-televised forum on minority issues, a Sept. 27 debate hosted by a prominent black commentator at an historically black college?

Republicans frequently complain that they are unfairly maligned as being insensitive to people of color; indeed, one of the more noteworthy pillars of the long-range Bush-Rove political game plan was to convince black and Hispanic voters that the GOP was a safe haven. Karl Rove's chief political emissary, the now-departed GOP chairman Ken Mehlman, spent much of his time ricocheting around the nation, trying to court non-caucasians. Just 16 months ago, President Bush said he considered it "a tragedy that the party of Abraham Lincoln let go of its historic ties with the African American community," and signaled that GOP should forge those ties again.

But today it's hard to see how that message can have any resonance, now that four '08 Republican contenders - Rudy Giuliani, Fred Thompson, Mitt Romney, and John McCain - have opted to stiff Tavis Smiley, the TV/radio host who is sponsoring next Tuesday's minority issues forum at Morgan State University in Baltimore. Newt Gingrich has called this decision "an enormous error," and no wonder: If the GOP has any hopes of being seen as open to diversity, its cause will hardly be helped next Thursday, when the TV cameras zero in on the four empty lecterns.

One of the biggest frauds in this episode is the excuse being floated by the four boycotting candidates, the old chestnut about "scheduling conflicts." This forum has been on the calendar since it was officially announced back on February 8. And "scheduling conflicts" were also invoked this year by major GOP candidates when they were approached by the NAACP, the Urban League, Univision, and the National Association of Latino and Elected Officials.

Over the last seven years, the racial situation has deteriorated even more. No child left behind, has left enough children behind that they could start a new country. The dumbing down of is having serious consequences, not the least of which is an increase in racism. The elephant in the room is now breaking things in an effort to make itself known.

In another group no-show, only Senator John McCain accepted an invitation to a TV debate on Univision, the major Hispanic network. One transparent factor in the selective shyness is that, except for Senator McCain, the major candidates have been avoiding nuanced approaches on the heated immigration issue. Simplistic speeches may play well on the stump, but they’re a shame to the party and nation. Next week’s Morgan State debate would be just the platform to put aside electoral pandering for larger principle on issues important to all Americans.

CNN's “Political Ticker” blog reports that the Rev. Jesse Jackson has accused Democratic Presidential candidate Barack Obama of "acting White" by not taking a more vocal stand on the Jena Six case. It's worth noting that says that he "does not recall" making such a statement, but I see no real reason to doubt the newspaper coverage. . . .

Generally, the phrase "acting White" has entered the public eye as a referent to Black youth seeking to tar their peers who excel academically. This, of course, is a bad thing, for it implies that authentic Blackness stands in opposition to intellectual pursuits. Thus, it is detrimental the construction of a positive, flourishing Black identity.

The "Awakening" model is spreading elsewhere in the country, which is good, but something else will need to happen in

[T]he Mahdi Army will be tougher to beat than Al Qaeda because they are less extreme and less likely to be rejected by the society as a whole. So while the Anbar model is exportable to an extent - it is being exported to , Salah a , and even to some places in the South - winning everywhere in (if it's even possible, and I really don't know if it is) will require something more. The success in is real, but it would be a mistake to assume that solution can be applied to the entire country. It probably can't. I wouldn't say reconciliation between Sunnia and Shias is impossible, but if it is possible it won't be because of what happened in Anbar.

has refused to cut interest rates in lockstep with the US Federal Reserve for the first time, signalling that the oil-rich Gulf kingdom is preparing to break the dollar currency peg in a move that risks setting off a stampede out of the dollar across the .

"This is a very dangerous situation for the dollar," said Hans Redeker, currency chief at BNP Paribas.

The little man in the over-sized leisure suit has Presidential candidates all atwitter with his planned visit to Ground Zero while he’s in to attend UN meetings.

Not since Saddam Hussein conned us with his coyness about WMD and fired off rifles for the TV cameras on a balcony in has a loony head of state provoked so much Sturm and Drang over so little.

By eliciting outrage, the Iranian President succeeds in getting the international attention he so clearly craves. When disdain and disregard would be so much more appropriate and effective in dealing with a punk whose aim is to be taken seriously on the international stage.

Google is road-testing a major initiative capable of hijacking a good deal of the web traffic the mainstream media ordinarily would get during the 2008 election in the United States.