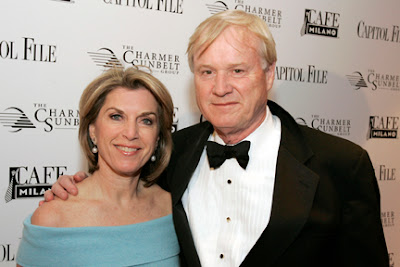 He may have massive crushes on the disreputable Judy Miller and the reprehensible Ann Coulter, but, for the most part, Chris Matthews and his balls of steel are scared shitless of powerful women, what with their feminism and sisterhood lunches, their unwillingness to play along with his chauvinism.

For Matthews, what this question really amounted to was this: Do you find it difficult to treat a woman with respect, to take a woman seriously, to consider her an equal. You know, because feminism has really fucked things up. The women of Matthews' perfect world ought presumably to be on their hands and knees scrubbing the bathroom floor, or whatever else Matthew would have them doing in that position, Miller and Coulter included.

The Senate's adoption of the Lieberman/Kyl amendment designating 's Revolutionary Guard a "terrorist group" isn't merely embarrassing, it's counterproductive. Designating the Revolutionary Guard a terrorist group -- which in contemporary American terms means they're a target -- makes it all the more important for Iran to keep us tied up and weakened in Iraq. The more we telegraph that we'd like to devote forces to regime change or strikes in Tehran, the stronger Iran's incentive to keep Iraq an unstable morass trapping ever-greater numbers of American troops who can't be easily diverted from a chaotic mission and are geographically vulnerable to Iranian counter-attack.

The bed-wetters aren't people who criticize the Iranian government. The bed-wetters are the hysterics who seem to think that the basic acts of diplomacy are a clear and present danger to the . Meanwhile, despite Just's best efforts to portray the recent outburst of Ahmedenijad-related hysteria as driven by human rights concerns, the freak-out movement wasn't driven by human rights groups, it was driven by the warmongering elements of the press -- The New York Sun and The New York Post plus the magazines and radio and television shows. The Human Rights Watch Iran Page dominated by actual human rights issues in , not by random screechings about Ahmadenijad's sightseeing schedule.

The profoundly depressing fact is how little has changed in the Village over the past several years. I'm not simply referring to rather disappointing results of Democratic control of Congress, though that too is of course an issue, but rather the sentiments and conventional wisdom of the political media industrial complex. It shouldn't be a surprise, I suppose, that this static mob would be slow to change and slower still to acknowledge any failures of their own.

The only explanation is that S-CHIP serves as a Trojan horse for nationalized health insurance. It's a particularly cynical method of forcing out private insurers by pushing government-controlled coverage onto children. It deserves a presidential veto, despite the inevitable demonization it will produce.

The Republicans have an alternative that uses tax incentives to level the playing field between those who get tax-sheltered employer-based insurance and those who have to pay for it directly. That approach may not be perfect, but it keeps entitlements from expanding when they should be contracting, and it provides assistance to the middle class without making the poor pay for it. That has to make more sense than this S-CHIP expansion.

Posted by Shaun Mullen at 4:46 AM
Email ThisBlogThis!Share to TwitterShare to FacebookShare to Pinterest