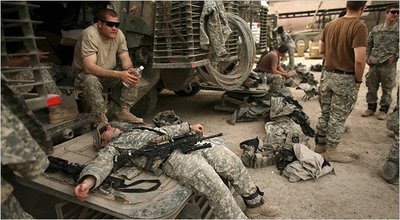 As I noted earlier this month, George Bush has broken the United States Army because of his reckless and never ending adventure in , and it's not going to be fixed anytime soon.

General George C. Casey confirmed that this week in an extraordinary appearance before Congress. It was extraordinary because the new Army chief of staff wasn't called up to Capitol Hill because of political grandstanding but because he requested a public hearing.

Casey, in his first appearance as CoC, told the House Armed Services Committee that the Army is:

"Out of balance . . . The current demand for our forces exceeds the sustainable supply. We are consumed with meeting the demands of the current fight and are unable to provide ready forces as rapidly as necessary for other potential contingencies."

It was Casey, of course, who was relieved of his position as commander of forces in because of his tepid support for the then-proposed surge strategy now being carried out by his successor, General David Petraeus, and proving so successful that only 56 people were killed and 103 wounded in car bomb attacks in Baghdad on Wednesday.

In their appearance before lawmakers, Casey and Army Secretary Peter Geren essentially drove a stake through the heart of the president's contention in his prime-time speech on September 13 that a possible drawdown of some 30,000 soldiers -- or roughly five combat brigades -- by next summer would be a result of all of the progress being made in .

What Bush didn’t say was that a drawdown of that magnitude would merely return in-country troop levels to what they were before the surge and that there is no alternative to such a drawdown.

This is because the 15-month tours of duty for these brigades will begin to expire next April, there are no units to replace them, and Geren and Casey and other service chiefs refuse to extend duty tours any further.

While the Casey-Geren appearance was not exactly subordination, it was a revealing indication that the White House and Pentagon may still be only a few miles apart physically, but they're light years apart in realistically assessing the state of the military and what the Forever War has done to it.

Photograph by Michael Kamber for The New York Times