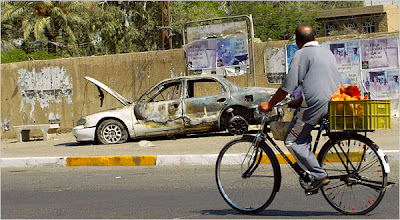 That's the amount that you and I have spent since 2004 to create a public-relations disaster in Iraq that threatens to eclipse the Abu Ghraib scandal.


That disaster is run-amok Blackwater USA contractors, some of whom happen to be outright mercenaries, who have transformed duties guarding diplomats and senior U.S. civilians, escorting convoys, protecting military bases and conducting security overflights into a series of bloody embarrassments that have further exacerbated tensions between occupiers and occupied at a time when the White House claims that real progress is being made in the Forever War.

The State Department, which spent the lion's share of that nearly $1 billion, and the Pentagon had turned a blind eye and deaf earto incidents involving Blackwater until bodyguards accompanying a speeding State Department convoy in Baghdad on September 16 iced at least 11 Iraqis (see photo of aftermath) in an apparently unprovoked attack.

With Blackwater founder Erik Prince, a right-wing Born Again Christian with close ties to the White House and Pentagon scheduled to testify before Representative Henry Waxman's House Government Affairs Subcommittee next week, State has informed the California Democrat that no one from Blackwater will be permitted to talk without White House approval. That, of course, is shorthand for "drop dead."

Waxman calls the move "extraordinary" and "unusual." I call it business as usual.

As for State officials themselves, Condi Rice is not even allowing them to testifying unless it's behind closed doors. Ditto on business as usual.

Blackwater's lucrative contracts and convenient immunity from Iraqi and U.S. laws are a consequence of the administration's radical vision of outsourcing all kinds government work, up to and including waging war. Much of what Blackwater does was once the domain of Military Police units. (Think about all those M*A*S*H episodes when Hawkeye and Trapper were pounced on by MPs.)

After considerable chest thumping, the government of Prime Minister Nouri Al-Maliki has backed away from calls for Blackwater to exit Iraq post haste. The reason is (choose one): U.S. forces would have to be drawn from important surge-related duties or Iraqi security forces would have to cover and they're not prepared to do so.

The Washington Post quotes one of those ubiquitous unnamed officials who populate so many stories about the war these days as saying there is considerable acrimony between State and the Pentagon over the unfolding scandal. He adds:

"This is a nightmare. We had guys who saw the aftermath (of the September 16 incident) and it was very bad. This is going to hurt us badly. It may be worse than Abu Ghraib, and it comes at a time when we're trying to have an impact for the long term. . . .

"This is a big mess that I don't think anyone has their hands around yet. It's not necessarily a bad thing these guys are being held accountable. Iraqis hate them, the troops don't particularly care for them, and they tend to have a know-it-all attitude, which means they rarely listen to anyone -- even the folks that patrol the ground on a daily basis."

The mess got a little bigger today when The New York Times reported that Blackwater has a reputation for shooting first and asking questions later, which is not all that surprising when your job is to protect diplomats and not being school crossing guards.

But, the Times said, Blackwater's associates (most are independent contractors, not employees) have been involved in twice as many violent incidents than DynCorp International and Triple Canopy, the two other U.S.-based security firms that have been contracted by State.

The Times quoted another unnamed official as saying:

"You can find any number of people, particularly in uniform, who will tell you that they do see Blackwater as a company that promotes a much more aggressive response to things than other main contractors do."

By the way, the Pentagon and Iraqi governments also are investigating Blackwater, but like the Abu Ghraib probes, don't expect them to amount to a hill of beans. Like the U.S. itself, Blackwater is above the law and in its messianic zeal answerable to no one, apparently not even The Big Guy.

Photo: Ali Yussef/Agence France-Presse/Getty Images
Posted by Shaun Mullen at 5:04 AM
Email ThisBlogThis!Share to TwitterShare to FacebookShare to Pinterest