Alan Greenspan's Shocking Confession & The Myth of the Free-Market Economy 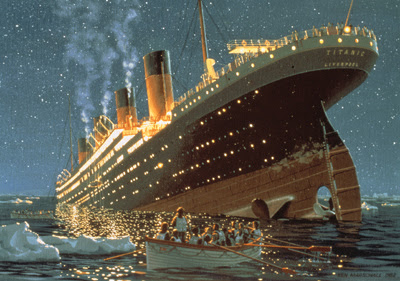 I think I got a B in Econ 101. I got an A, however, in keeping taxes low and being fiscally responsible with the people’s money.

The conservative business press is exalting over how Alan Greenspan took down Jon Stewart when the former Federal Reserve chairman and economic guru appeared on the Daily Show the other day.

Indeed, the usually inscrutable Greenspan was downright irrationally exuberant and got off some good ones. This included a barbed suggestion that Stewart reread The Age of Turbulence, his new book on the global economy, so he can better fathom why the nannies who babysit s so-called free market economy like Greenspan did for 19 years always know best, as well as why investing in the stock market is preferable to the once hallowed but apparently passé concept of working hard and putting one's money in a bank, or even under a mattress.

But lost in the self-congratulation was an exchange that revealed Mr. Central Banker and his fellow nannies to be acolytes in the One True Church of Capitalism. This means serving Wall Street trumps the needs of Main Street, and as a consequence lot of good people are being driven to wrack and ruin:

Greenspan: You’re raising a very fundamental question. . . . You didn’t need a central bank when we were on the gold standard, which was back in the nineteenth century. And all of the automatic things occurred because people would buy and sell gold, and the market would do what the Fed does now. But most everybody in the world by the 1930s decided that the gold standard was strangling the economy. And universally this gold standard was abandoned. But you need somebody to determine – or some mechanism – how much money is out there, because remember, the amount of money relates to the amount of inflation in the economy. . . . In any event the more money you have, relative to the amount of goods, the more inflation you have, and that’s not good. So . . .

Stewart: So we're not a free market then.

Stewart: There's a visible – there’s a benevolent hand that touches us.

Greenspan: Absolutely. You're quite correct. To the extent that there is a central bank governing the amount of money in the system, that is not a free market. Most people call it regulation.

Yet again Stewart proves himself to be perhaps the best source of news and analysis on the boob tube (video here) in getting the congenitally circumspect Greenspan to blurt out the obvious: A truly free market would be based on a value standard like the gold standard that cannot easily be manipulated for political or personal purposes.

The stark reality is that the economy is free market in name only.

Greenspan -- whom I have knighted Sir Alan because he is so noble and all knowing -- certainly never intended publication of The Age of Turbulence to coincide with the scariest rumbling and farting in the U.S. economy in ages, including a weakened dollar, that are legacies of his stewardship.


His tacit admission about what the benevolent hand -- those nannies -- are really up to is the most dramatic evidence to date about why the stock market is soaring to new heights while millions of Americans are fighting for their economic lives.

Many people must have wondered what the hell the ebullient talking heads on MSNBC and other news shows were babbling about when the Dow Jones Industrial Average blew past the 13,000 mark in April. I know that I did.

This is because many of us are making do with less, sometimes a lot less. Home foreclosures and bankruptcies are soaring, health-care and education costs are going through the roof, and once sacrosanct pension plans are collapsing.

here is virtually no discussion about the lousy state of what I call the kitchen table economy, which despite George Bush's upbeat assessment at the top of this post has relentlessly headed south over the last six-plus years of an administration that has cosseted the rich, ignored the poor and robbed the middle class.

One pair of statistics speaks volumes about the disconnect:

The median hourly wage has risen a little less than 10 percent in the last 25 years while productivity has grown by more than 70 percent. And the less you make -- if you haven't been downsized or laid off -- the bigger the disparity is.

This makes living the American dream – owning a home, sending the kids to college and having decent health-care insurance – substantially more difficult than it was a generation ago. For the first time since forever, a majority of Americans don’t believe the next generation will be better off than they are.

But don’t expect Sir Alan to bring any of that that up.

As Barack Obama put it in a speech to Wall Street executives at Nasdaq headquarters:

Then there is Wall Street's determined refusal to come to grips with the subprime mortgage diaster. This is a result of a combination of factor, not the least of which is that a lot of people were not prepared for the responsibilities that come with home ownership. But the biggest factor is the outrageously high number of loans that were made to buyers with poor credit, a goodly number by predatory lenders whom Sir Alan did nothing to try to rein in during his tenure at the Fed.


About $450 billion of the subprime mortgages written last year are being paid down by homeowners, with as many as 15 percent expected to throw in the towel in bankruptcies or foreclosures. Meanwhile, the losses sitting in loan pools are staggering.

But don’t expect Sir Alan to bring that up, either.

For the record, his successor at the Fed is up to the same mischief. Ben Bernanke got rave reviews when President Bush nominated him, but he too is in the thrall of Wall Street -- would you expect anything else? -- and evinces little empathy for the plight of Main Steet.

While acknowledging that homeowners facing foreclosure are a problem, Bernnake has spoken out most forcefully about his concern that that the economy could be harmed if Fannie Mae and Freddie Mac take on too much risk in helping those homeowners and then there is a calamity (a terror attack or natural disaster come to my mind) that would require a federal bailout.

Bernanke gets a big wet smooch for last week's half point interest rate cut, which was designed to keep the economy from further slowing down.

But he has not taken a stand on the biggest problem.

That is excessive risk-taking on his beloved Wall Street, including high-risk loans and excessively secretive and underregulated hedge funds and private equity firms. Which is what got the U.S. economy in such a mess to begin with.

Like Sir Alan before him, Bernanke is another unquestioning lock-step follower of the Conventional Economic Wisdom when millions of Americans whose finances are hemorhaging are desperate for a leader.

It is a great opportunity to weigh in on one of these issues, that of the subprime residential mess. I believe that subprime lending is a lot like Jessica Rabbit...not bad, just drawn that way. There are companies, like Ocean Capital in Rhode Island, that make financing available for sole proprietor businesses that would not be able to secure financing in the traditional marketplace. We've all got to start somewhere and oftentimes a stated income loan is the only means to start one's business.

"...the scariest rumbling and farting in the U.S. economy in ages..."

Oh please. Not again. Progressives are going to eventually run that well dry (faster, please), thinking that they can argue economy armed only with condescension and selective data.

Alan Greenspan may be annoying in his style, but he is very smart. Nobody likes him because nobody likes what the economy is doing at any particular time except boom riders, and he tries to discourage them. What the Fed does requires a great deal of input, data from all over the world in every economic sector, a great deal of thought and analysis, and very little output. The reins that they control are very disappointing. No one really knows what is going to happen when they raise or lower rates. No one really knows what's best for the economy, the country or the future. We have successfully controlled inflation and avoided depression for a long time now, despite the abuse that politicians have heaped onto the economy. That strikes me as a wonderful outcome.

The benefit of capitalism is that it forces necessary sacrifices continually rather than suddenly in catastrophic surges such as the collapse of the USSR.

I think it's true that we, in the US, are not much better off than we were in the past, but in a worldwide perspective we're doing pretty well, but the economic uplift on the rest of the world has been pretty remarkable. Do you think the average Chinese citizen longs for the old days?

Jon Stewart's the best interviewer on the air today.

Except that valuing an exponentially expanding amount of output using a finite quantity is possibly the most stupid idea ever to enter the head of a human.

yes, you are truly as stupid as alan greenspan. the fed's "rate setting" is actually a target achieved through open market activity. i.e. interest rates ARE set by the market, just the fed buys and sells to effect the rate. read a book.