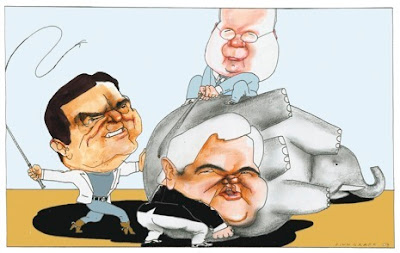 Who's to blame for the Republican implosion? More here.

In the years since I first met him in 1974, I have learned that it's wise to take Newt Gingrich seriously. He has many character flaws, and his language is often exaggerated and imprudent. But if there is any politician of the current generation who has earned the label "visionary," it is probably the Georgia Republican and former speaker of the House.

[H]onestly, on the facts, nobody's better suited than Newt to both hark back to high times for the GOP and break decisively with Bush ... his other shortcomings notwithstanding. I for one hope Newt runs.

The single most important issue of the presidential elections next year: Who is going to bring me the the biggest pile of dead terrorist carcasses over the next four years?

Among the sensible people who agree with me on that, many will argue there is no close-second; this is a far-and-away thing. I respectfully admonish them to reconsider, because the second-most-important issue is very important indeed, and it is breathing hotly on the neck of the first.

Coming in at a close second, and I do mean a close one, is a big package of interrelated sub-issues all knotted together. They have to do with the people who are actually proud to call themselves “liberals,” not in the classic sense, but in the post-modern sense. Can we be fooled into thinking they are really champions of our freedoms, when they’re forcing us to think that, and coercing us into silence on any other viewpoint? Are we really so dense that we fail to see, or we can be distracted from seeing, the irony in that simple contradiction? Are liberals crazy, or just stupid? Do we really have to let them vote even when they so obviously lack the level of maturity one would be expected to achieve by age eighteen?

The G.O.P. needs at least one minority group in its ranks if it's going to be a viable political party in the 21st century. As the former vice-presidential nominee Jack Kemp asked rhetorically last week, "What are we going to do — meet in a country club in the suburbs one day?"

I don't mean to be rude, but what the hell is going on? No impeachment proceedings, despite the Kucinich Impeachment Articles languishing in the House? A refusal to make the Republican Senators filibuster the Webb amendment that would have required a mandatory year’s rest between deployments to or (which wasn’t even an antiwar bill, but one crafted specifically to support the troops)? Twenty two Democratic Senators voting to condemn Moveon.org for exercising their right to free speech? No strategy for ending this war other than a vain hope to “peel away” a few “moderate” Republicans? Mealy mouthed explanations for why nothing gets done?

Nothing in modern politics seems to defy the laws of physics more than the Rudolph Giuliani campaign for the Republican nomination. Watching a thrice-married serial adulterer who supports abortion rights and gay rights and knows less most policy matters than your average rhododendron try to win over Dobson and Tancredo’s loyal minions has the roughly the same feel as watching the test car approach the striped wall in super-slow motion.

In the Republican primary, ideology and partisan affiliation are major dividing lines that alter the dynamics of the race. Giuliani and Thompson are basically tied among Republican primary voters who describe themselves as strong Republicans, as well as among conservative leaning Republicans. McCain and Giuliani are close among independents who vote in the Republican primary. Additionally, the Thompson gender gap (widely reported) is worth keeping an eye on. In this omnibus survey, it is slightly larger than the gender gap, and in a recent ARG poll it was up to 30 points. It is bouncing around a lot, but I think Thompson will probably be in trouble in the general election if he can't even convince Republican women to vote for him.

For all that some Christian Republicans claim Christ as one of their own, it's far more likely that he would vote Libertarian. Treat people with fairness and love; otherwise leave them alone.

If smirking self-confidence were money in the bank, they would both be billionaires, the frat boy who got hold of a country and won’t let go and the football star who got away with murder and thinks felonies are his birthright.

George W. Bush and O.J. Simpson keep doing what they do, despite all the warning signs to slow down and consider the consequences. Why?

Because their grotesque sense of entitlement assures them they can get away with anything, and so far they have.

Bush will leave the White House as the worst president in history while O. J. could end up in prison, but that won’t wipe the "What, me worry?" smiles off their faces.

You are good at this quote selection posting. You really give a feel for the scope of political thought in the country without misrepresenting or postering the source. Most items evoke a "pos/neg/interesting" response, at least from me. I'm sure some folks can't handle it because of the difficulty of pigeon-holing the comments.

I happen to agree with the Broder comment. Newt is a pretty smart guy. However, I think it's a little rude to snub Al Gore on the "visionary" thing.