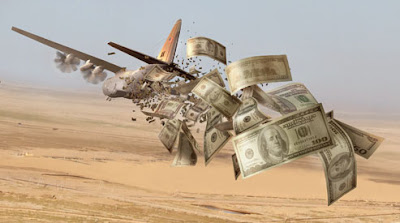 Between April 2003 and June 2004, $12 billion in currency-much of it belonging to the Iraqi people-was shipped from the Federal Reserve to , where it was dispensed by the Coalition Provisional Authority. Some of the cash went to pay for projects and keep ministries afloat, but, incredibly, at least $9 billion has gone missing, unaccounted for, in a frenzy of mismanagement and greed. Following a trail that leads from a safe in one of Saddam's palaces to a house near , to a P.O. box in the , the authors discover just how little anyone cared about how the money was handled.

Some cynics argue that George Bush is playing a small, domestic game of keeping the ordeal [] going so that the next Democratic president can be accused of losing – not him. But this theory, while not totally implausible, does not quite fit with the messianic ambitions of the president and apocalyptic fears of Vice-President Dick Cheney.

Now that everyone has finally agreed that Iraq is another Vietnam, we can move on to the next point which is that, having lost the war, the war party in the US is going to blame their domestic opponents, just like they did after Vietnam. The only difference is that the war-peace divide now matches the partisan division between Republicans and Democrats.

In this setting, the idea of looking for a compromise is just silly. The Republicans have made it clear that they don’t want one. Even the dwindling group of alleged moderates aren’t going to vote for anything that would seriously constrain Bush. So, the Democrats can choose between acting to stop the war now, or inheriting it in 2009. There’s no possibility of pushing anything serious past the Senate filibuster, let alone override a veto.

What amazes me is that Republicans who are now exclaiming at what has happened to the Republican Party (and yes, I talked to my mother this morning) didn't see this coming. Everything, every value, that the Republicans have held up for my lifetime as desirable has been pointing us in this direction. As I've said before on the HuffPost, all of this is the necessary consequence of traditional Republican values, not an accidental byproduct. Or maybe I'll put it this way -- when you reject common humanity, value profits above people, practice sectarian religion, feel contempt for the choices of others, exalt wealth, conflate consumerism with citizenship, join exclusive clubs, daily practice unkindness rather than kindness, and develop theories, such as those of free market capitalism, that allow you to congratulate yourself morally for selfishness and short-sightedness, then being a gang member is in your future.

They swapped principle for power.

Ol’ VD Hanson is rilly, rilly upset at a lot of people right now. He’s upset at liberals, first and foremost, for not taking NineEleven seriously enough. He’s upset with Noam Chomsky because . . . well, when has anyone ever needed a reason to be upset with Noam Chomsky? His name alone is like some sort of evil incantation, upon the recitation of which dread Cthulhu will no longer lie dreaming in his house in sunken Ry’leh or something.

But the people whom Hanson is most upset with right now are apparently the ungrateful wretches who live in .

How can they be so cruel to us? Don’t they know how much we’ve done for them? How we’ve sacrificed? All those hours spent slaving over a hot stove every day, just so they could have a nice meal every now and then, and for what? After all . . . whoops, I’m sorry; I started channeling my Jewish mother/grandmother there for a minute.

The only thing to feel in anticipating a possible Clinton-Giuliani race next fall is dread. Each would bring the worst out of each other; the race would reprise the worst of the far right and far left rhetoric of the 1990s; we would be deepening polarization and increasing division in wartime. We know from the 2004 campaign (the Swift Boat obscenities above all) that the partisan right will stop at nothing to declare Democrats traitors and hostile to American soldiers. Rudy will love to do this. And he has already started.