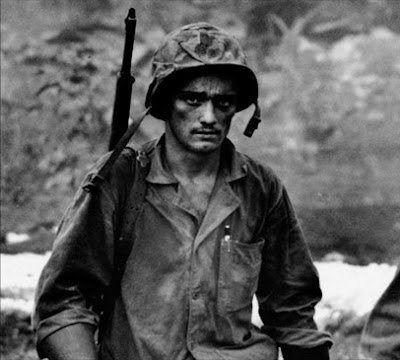 "There’s no such thing as a good war, only necessary wars and just wars," says former Marine Corps torpedo bomber pilot Sam Hynes in the opening minutes of The War, the magisterial Ken Burns documentary that premiered on most PBS stations last night and continues in seven parts and some 14½ hours in all through early next month.

In fact, the first episode is called "A Necessary War" and would seem to be a backhanded reference to . But Hynes was speaking of Japanese atrocities in the Pacific and Burns says the interview was shot before the 2003 invasion and toppling of the Saddam Hussein regime.

Therein lies a central lesson of Burns' latest mega-documentary, which while not his best is probably the most nuanced treatment of a war that has been written, talked and filmed about endlessly in this era of countless History Channel programs, Steven Spielberg’s Saving Private Ryan and Tom Brokaw’s The Greatest Generation, a time when World War II veterans are dying at the rate of more than 1,000 a day.

As Burns puts it in debunking the notion that The War was produced because of Iraq, let alone Vietnam:

"When people complain in later episodes about not getting the right equipment -- which is endemic to all wars -- or generals making the wrong decisions, or politicians thinking about the upcoming elections, these are universal realities of war that just happen to be there accidentally. But we're not unmindful that they will engage people with questions about the current situation. That's the only reason why you do history. You're not going to change what happened on June 6, 1944, but you're going to ask questions that are going to help us on Sept. 11, 2007."

The War contains substantial never-before-seen film footage, some of it suppressed by the U.S. government at the time, and I sometimes had to remind myself that this was not special-effects wizardry, but the real thing. Yet although some of the clips are shockingly graphic and the blood flows in torrents, there is a familiarity to The War because the seminal events are so familiar, as is Burns' narrator voice-over, talking-heads technique pioneered in The Civil War, his groundbreaking 1990 documentary and masterpiece.

Burns uses four American towns – , ; , ; , ; and , California – to frame The War, moving back and forth between homefront and front-line experiences, and it is the moving testimony of the men who made it back home that will stay with you.

Quentine Aanenson, a pilot from Laverne, wrote to his sweetheart:

Hynes on being a bored young man in a small town one day and in combat the next:

Ray Leopold of of the day his unit liberated a Nazi concentration camp:

"I think the horror is still with me. I think there's no apology that can ever atone for what I saw."

"You would think that at that moment, after killing a human being, you would feel a little remorseful. I felt pleasure. And the men applauded. 'You were terrific, Dan.' "

Burns and co-director Lynn Novick return frequently to the irony that while the was battling fascism abroad it was upholding racial injustice at home. Although this is a major theme in The War, Burns caught heat from Hispanics and Native Americans that their contributions had been ignored and added substantial footage about them in mini-documentaries that PBS stations are showing in conjunction with the main event.

While it is damning with faint praise, it may be the familiarity of the Burns format that is The War's only real detraction. The documentary is, in a sense, a prisoner of its format, which can occasionally have a kind of numbing predictability since we all know who the winners and losers were.

No matter. In the end, The War is a huge achievement and a rare television event – something that families can and should watch together. I hope that you and your loved ones, especially school-age kids who can be prepared for the graphic scenes and occasional obscenity, are able to do so.

And while Ken Burns has taken pains to explain in interviews that The War was not produced with Iraq in mind, comparisons are unavoidable.

While not diminishing the valor of the men and women fighting in Iraq, it makes George Bush even smaller and more petty for a folly that could not be more different than World War II, which make his mangled historical comparisons between the two so obscene.

I was delighted to find that Burns gives such prominence to Sam Hynes. His memoir "Flights of Passage" is excellent and will probably sell a million more copies now that he's been featured in this series.

I tend to feel like you, that any honest viewing of this series will show how different these wars are (one between organized nation-states and the other between states and criminals).

But someone who is for this Iraq War can easily see what they want in this documentary too.

By focusing on "war," documentarians ultimately glorify it. It's inevitable. You can't see all this killing without labelling some of it heroism.

But war equals death. War is ultimately the failure of society and a regression to man's time in the wild.

Instead of another documentary on war, how about a documentary on Peace, about the wars we didn't have to fight and avoided because good people, the real heroes, met, talked, found compromise, and found a way to live with one another.

Let's do a documentary series on the Peace Makers.

You are right that supporters of the Iraq war will see something completely diferent in the documentary. To me, a supporter, the documentary makes me laugh even more at the whining and complaining the left does about Iraq.

Despite the claim that WWII was the good war, hideous atrocities were commitied on an epic scale. Americans, it can be argued, had no place in Europe's affairs. Iraq is a cakewalk compared to WWII.

In fact I imagine the majority of people watching the documentary are conservatives, because we, by our nature, enjoy war stories.

I live in the San Francisco Bay area I know only one conservative other than myself. Not one liberal I work with or talk to has watched one episode. They are too busy passing around a copy of the latest "Dexter" episode.

As for the supposed "peacemakers" they made peace on the backs of soldiers and dead civilians in every case.

How does this start? The U.S didn`t get there until 1941. Should we wait for a documentary from the British or the French to see what happened for the first two years or just rely on the usual American attitude of "We won the war singlehandedly"?

Can you imagine America living with a Nazi Europe? A Nazi Africa? A Nazi Russia? All 3? Don't forget, the British and Russians begged the USA to get involved in this war. In no way shape or form does this documentary suggest that America won the war single-handedly. It is, however, a film about America's experience of World War II. It's for American public television, just as The Sorrow and the Pity was about the French experience of World War II and made for French TV.