Alberto Gone-zalez: The End of an Error 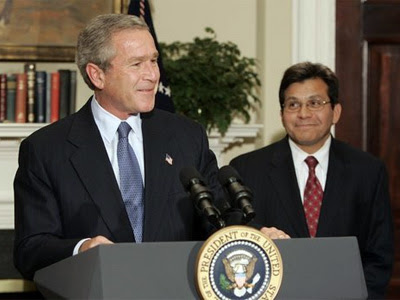 THE JOKE WAS ON THE AMERICAN PEOPLE
Alberto Gonzalez, a legal lightweight and dull-witted apparatchik whose name was once floated as a possible Supreme Court justice, leaves in shambles a Justice Department that he willingly helped the White House transform into a branch of the Republican Party.

President Bush repeatedly stood by Gonzales even as he faced increasing scrutiny for his abysmal leadership of the department and bipartisan calls for his resignation, his role in the dismissals of nine attorneys and whether he testified truthfully in numerous appearances before Congress. To do otherwise would have been to acknowledge that this longtime colleague and helpmate was not up to the job, and that was not about to happen in an administration where politics trumps policy and loyalty, not honesty, is the greatest virtue.

Gonzalez, as it turned out, had sworn allegiance to the president and not the Constitution.

When asked about the storm clouds surrounding Gonzalez, the president’s typical answer has been: "Why would I hold somebody accountable who's done nothing wrong?" Whining to the end that he has been treated unfairly and (isn't this rich) was being hounded out of Washington by partisan politics, Gonzalez leaves an extraordinary legacy:

A disdain for the rule of law -- whether it had to do with torture, civil rights or fair elections -- that bordered on the obsessive.

Obdurate to the end, Gonzalez was denying through his press spokesman up to this morning that he was leaving although he had told Bush of his decision on Friday. Sources say the president initially rebuffed Gonzalez' decision but relented after a face-to-face meeting in Crawford, Texas, yesterday.

Gonzalez would not explain why he was turning in his badge at a brief press conference this morning and refused to answer questions, although in a reference to being the first Hispanic AG, he said:

"I have lived the American dream. Even my worst days as attorney general were better than my father’s best days."

I would say it was more a case of screwing up the American dream.

The president later praised Gonzalez as "a man of integrity, decency and principle."

Michael Chertoff is said to be the leading choice as a successor. What better way to honor his service as the sycophantic Homeland Security czar on the second anniversary of Hurricane Katrina? And if Chertoff is the prez's pick, doesn't it just speak volumes that there seem to be so few people who qualify as Cabinet-level department heads under the president's special standards that he seems to keep picking the same people from the same small pool?

(Solicitor General Paul Clement will be interim AG after Gonzalez steps down on September 17. The safest bet for the White House would be to stick with Clement, who has not been dragged into the U.S. attorney scandal.)

In any event, do not expect wholesale changes at main Justice as the successor will spend the next 15 months doing damage control and dealing with the various investigations that he inherits.

He made John Ashcroft and even Janet Reno look good.

While the departure is welcome, it's not like Bush and Dick Cheney are packing their bags anytime soon, so the sound you hear is one hand clapping.

For one thing, it removes some of the urgency from the various Democrat-led investigations into Gonzo's mischief. For another, it is "a real moment of truth" for the majority party, as Glenn Greenwald puts it:

"Democrats, who have offered up little other than one failure after the next since taking power in January, can take a big step toward redeeming themselves here. No matter what, they must ensure that Gonzales' replacement is a genuinely trustworthy and independent figure.

" . . . The standard excuse invoked by Democrats to justify their capitulations -- namely, that they cannot attract a filibuster-proof or veto-proof majority to defy the President -- will be unavailing here. They themselves can filibuster the confirmation of any proposed nominee to replace Gonzales. They do not need Blue Dogs or Bush Dogs or any of the other hideous cowards in their caucus who remain loyal to the most unpopular President in modern American history. . . . They only need 40 Senate votes to achieve it.

A FINAL THOUGHT
Josh Marshall, who singlehandedly broke the U.S. attorney scandal at Talking Points Memo and rode it hard until the MSM finally took notice, deserves a victory lap.

The blogosphere is very much and always will be a work in progress, but Josh showed the Big Boys a thing or three about doggedly staying on a story in the face of world-class stonewalling, as well as creatively using his readers as citizen journalists to help in his investigation.

More here on the resignation.
Posted by Shaun Mullen at 8:53 AM
Email ThisBlogThis!Share to TwitterShare to FacebookShare to Pinterest

And at least Ashcroft had a wonderful singing voice. ;-)

Great, great post Shaun. You were truly in voice.
Craig

I shouldn't have been stunned (and yet, somehow I was) by: 1) the Chertoff as AG rumor; and 2(Bush's announcement of the resignation as Gonzo being DRIVEN from office by partisan politics.

I think I'm going to go back to bed now and hide under the covers.

the whole speech was pathetic, then again....