Quotes From Around Yon Rove-osphere 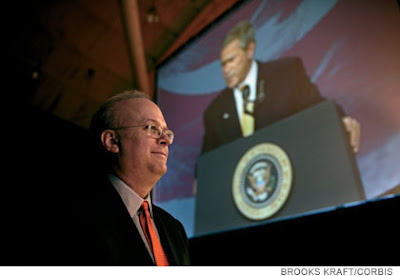 [Karl Rove's] legacy is a conservative movement largely discredited and disunited, a president with lower consistent approval ratings than any in modern history, a generational shift to the Democrats, a resurgent al Qaeda, an endless catastrophe in Iraq, a long hard struggle in Afghanistan, a fiscal legacy that means bankrupting America within a decade, and the poisoning of American religion with politics and vice-versa. For this, he got two terms of power - which the GOP used mainly to enrich themselves, their clients and to expand government's reach and and drain on the productive sector. In the re-election, the president with a relatively strong economy, and a war in progress, managed to eke out 51 percent. Why? Because Rove preferred to divide the country and get his 51 percent, than unite it and get 's 60. In a time of grave danger and war, Rove picked party over country. Such a choice was and remains despicable.

His departure will no doubt be the subject of celebration for the president's most vociferous critics, but I think they'll wind up missing him more than the president's supporters. They won't have Rove to kick around any more, and after the shock wears off, it will become apparent how silly all the Rove-kicking was from the beginning.

Karl Rove is upbeat and unbowed as he heads for the exit with his head held high. He insists that "Iraq will be a better place" thanks to the Surge, that President Bush "will move back up in the polls," that the ’06 Republican wipeout was "a really close election," and that he did not screw up big time in 2005 when he drained Bush’s political capital by putting his boss on the road to stump in vain for the partial privatization of Social Security.

So says the political guru better known by the nickname "Bush’s Brain," in his de facto resignation announcement. . . . Clearly, he will continue to dwell within the reality-challenged Bush bubble long after he departs at the end of this month, purportedly to spend more time with his family.


Much will be said in the days ahead about how Rove’s signature ambition – crafting permanent majority status for the GOP – turned to ashes in the second-term wreckage of the Bush administration, and about how his combative philosophy of polarized governance probably hastened his boss’ demise. Many observers will cite many different examples. I will cite only one: The aforementioned ’05 campaign to partially privatize Social Security, not only because it illustrates Rove’s arrogance and his fundamental misreading of the public mood, but also because (most importantly) it exposed one of the president’s most fundamental flaws.

He was and remains an autodidact, and a large part of his self-image depends on showing that his command of history and politics is an order of magnitude greater than other people’s. Rove has a need to outdo everybody else that seems to inform his sometimes contrarian views of history. It’s not enough for him to have read everything; he needs to have read everything and arrived at insights that others missed.

History will judge Rove a colossal failure, a man who never understood how to govern and, for all his immense knowledge of polls and politics, never really understood the times he lived in. It was 9/11 that both made and broke the Bush presidency, not some kind of mystical McKinley-esque realignment. Rove was blind to that, and blind to the way Bush should have governed after 9/11. His one-track mind, in which every problem is solved by wielding the biggest, nastiest partisan club you can lift, just couldn't adapt. It's fitting that he insisted on making even his final act as calculatedly partisan as he could, announcing his resignation not through the White House press office, but in an interview with the editor of the Wall Street Journal editorial page. Sic transit, Karl.

[Wall Street Journal interviewer Paul] Gigot lets Rove defend himself and his legacy, and what I see, alas, is the mark of self-delusion and blindness that has damaged the White House and the Beltway GOP. Rove pats President Bush (and himself) on the back for the disastrous Medicare entitlement expansion and the aborted Social Security reform effort. . . .

Not a word here about the Harriet Miers debacle, the botching of the ports battle, or the undeniable stumbles in post-Iraq invasion policies.

And not a word about the spectacular disaster of the illegal alien shamnesty, which will be the everlasting stain Rove leaves behind.

Karl Rove's legacy will not be what he wanted it to be.

The political guru who made President Bush what he is today had hoped to leave behind a permanent Republican ruling majority. Instead, his tenure will stand as an example of how divisiveness and partisanship are not conducive to successful governance.

After years of being lauded as a political genius, Rove nevertheless leaves his party in worse shape than he found it, with his boss profoundly discredited in the eyes of the American people.

When historians look back at Bush's squandered opportunity to unite the country and even the world behind a shared agenda after 9/11, part of the blame will go to Vice President Cheney and the decision to invade Iraq. But part will accrue to Rove for choosing to use national security as a wedge issue.

Mr. Rove failed his own party, as well as the American people, when he counseled President Bush to turn every serious policy debate — Social Security, the war in Iraq, even terrorism — into one more political dogfight. Today, despite Mr. Rove’s claims of invincibility, both houses of Congress are back in Democratic hands, Mr. Bush’s approval ratings are around 30 percent and many Republican presidential candidates are running as fast as they can away from the Bush legacy.

Mr. Rove can now contemplate that legacy from his home in Texas. But he should not get too settled in. Congress needs to use all its power to bring Mr. Rove back to Washington to testify — in public and under oath — about how he used his office to put politics above the interests of the American people.

In a world in turmoil, why are we consumed with news about and commentary on Karl Rove? You'd think he was Paris Hilton.