GOP Wannabes: I Just Don't Get It 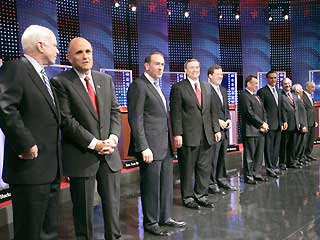 Even the Republican Party's own pollsters say that it will take a miracle for the GOP to keep the White House, let alone regain control of Congress, in 2008.

Despite a slight uptick in poll numbers because of some success with the surge strategy, George Bush remains a deeply unpopular president and a substantial majority of Americans see the war for what it is – a failure.

Yet most Republican presidential wannabes are not only not trying to distance themselves from their president and his war, they are avidly embracing both, and in Rudy Giuliani’s case, he's already jumped the foreign policy shark. ("Curtis LeMay without the experience" is how one blogger describes him.)

It has been noted by pundits far more sage than I am that this situation is a result of the candidates needing to play to the party's base in a campaign that, after all, has nearly 15 months left to go. But the last time I looked at the GOP base it resembled a prune. And isn’t courting disaffected Independent voters and YouTube vidiots just as important?

Has the GOP simply become so ossified and out of touch that it's fallen and just can't get up? Or in terms that the older gents who comprise most of this demographically challenged field might understand, can't get it up?

The Evolution of the Republican Presidential Contnders

"When the Truth came knocking"

The moderator says to the assembled Republican Presidential contenders, "This is an open question for the candidates."

Evolution theory holds that man is a direct genetic descendant of hairy arm swinging, tree climbing African apes. The scientific process of carbon dating confirms the dates for such evolution and shows that man in this sense predates the Bible's time line, so to speak, by hundreds of thousands of years at a bare minimum. What is your opinion on the validity of carbon dating?

Romney: People will say there was a time that I embraced carbon dating but in my maturing process I have opened my eyes to how destructive liberal ideation can be to man's ascent. Junk science should not be employed to accelerate the decline of our moral virtues.

McCain: I am a firm believer that the age of the earth is a matter of state's rights.

Thompson: The media's obsession with my wife's youth has reached a new low. They're saying that she is in effect 'carbon dating' which I find offensive.

Brownie and Huckee (in unison): "Attacks on religious values are a staple of our opposition. Brothers and sisters, let us pray for God's hand to smite the ballot boxes of the heathen."

Giuliani: "Believing in evolution is weakness in the face of the enemy. It allows terrorist scum and their democratic party appeasers amongst us to encircle our homes and maim our children. Science in pursuit of planetaty wide war is to be exalted but to use it appease Islamofascist aggression is treason. I will only appoint judges that know the ramifications of using science in pursuit of weak kneed terrorist lovers.
Craig Johnson
cognitorex