Will Rummy Have a McNamara Moment? 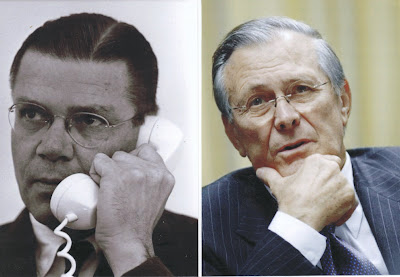 Is former Defense Secretary Rumsfeld, onetime collegiate wrestling champion, fitness freak and an all-around tough guy who preferred to stand at his Pentagon desk rather than sit, losing his stuff?

According to a gossipy report in the WaPo, the people accompanying the 75-year-old Rumsfeld when he lunched last week at Morton’s in Washington had to help him onto an escalator, held his elbow and opened doors for him.

A Republican tipster told the WaPo that "he looked old," although that was not my impression when I watched him lie and obfuscate his way through a House subcommittee hearing on the Pat Tillman cover-up a mere two weeks ago.

Now as someone 15 years Rummy’s junior who has his own share of aches and pains, I have a certain amount of empathy for him. After all, he was in the engine room for the war and his name is writ large on the worst foreign policy blunder in history. I can only imagine that the stress he was under might finally have caught up with and literally crippled him.

But what I really want to know – but do not expect to find out anytime soon – is whether Rumsfeld has had or at some future time will have what I call a McNamara Moment.

Robert McNamara, for you youngins out there, was secretary of defense during the Kennedy and Johnson administrations and was in the engine room for the early years of the Vietnam War, which didn’t turn out too swell, either.

Like Rumsfeld, McNamara was a control freak who thought he had all the answers, surrounded himself with sycophantic acolytes, did not take kindly to dissenting generals, was a technocrat who worshipfully embraced sophisticated weaponry, projected an unshakable faith that he was doing the right thing, communicated poorly in public forums . . . and turned out to know jack about how to run a war.

And like Rumsfeld, was forced out or quit depending upon whom you talk to. (Update: It was reported after this was posted that Rumsfeld submitted his resignation the day before the mid-term election, but President Bush withheld the announcement.)

McNamara left the Pentagon in 1968 at the height of the Vietnam War to run the World Bank for a decade or so and had been absent from the world stage for several years when he wrote In Retrospect: The Tragedy and Lessons of Vietnam, a reflection on his years running the war that was published in 1995.

This was followed by media appearances and speaking tours amidst an extraordinary outpouring of animus from a lot of people with a lot of pent up hostility over the war, including Yours Truly, and more or less culminated in The Fog of War: Eleven Lessons from the Life of Robert S. McNamara. This Academy Award-winning 2003 Errol Morris documentary largely consists of interviews with the man himself.

McNamara has never explained the circumstances of his catharsis, that point at which he realized his manifold failures as defense secretary and the immense suffering, death and deprivation that he and LBJ were responsible for. One can only assume that it did not come to him in the middle of the night a la Ebenezer Scrooge and the Ghosts of Christmas Past, Present and Yet to Come, but rather in a drawn out metamorphosis befitting a man of his intellect and analytical skills.

McNamara never actually apologized for his role in the Vietnam debacle, but clearly was haunted by it, and his mantra became "We were wrong, terribly wrong."

Rumsfeld also has not apologized and it is difficult forseeing that he will ever do so, but is he too haunted by ?

Again, I wish the man no ill and have not a shred of schadenfreude now that it appears his health may be failing. Rumsfeld is intensely proud and very private, so I do not know if he weeps bitter tears when he reads that yet another man or woman he was responsible for sending into battle without enough support, let alone the proper equipment, is pulverized by an IED, shot dead by an insurgent sniper or snaps under stress and is brought home in a straightjacket.

And continues to grow and grow.

I remember after left Rumsfeld, announced a minor critique of the Iraq war.