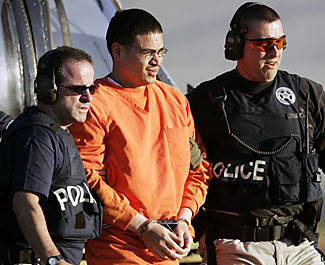 A jury returned two guilty verdicts in the case of so-called "dirty bomber" Jose Padilla this afternoon, but no matter how it ruled this man -- who is an American citizen -- already had been convicted in the court of public opinion by a people inured to the Bush administration-approved coercive techniques.

As the Christian Science Monitor eloquently puts it in an editorial:

"Yet, when it came time to put Padilla on trial, the government's case in included no mention of a dirty bomb . . .

"Although they seek a life sentence, prosecutors introduced no evidence of personal involvement by Padilla in planning or carrying out any specific terrorist plot or violent act.

"There is a reason the government's case is so thin, legal analysts say. If prosecutors brought the dirty-bomb plot or other alleged illegal actions by Padilla into the case, it would open the door for courtroom scrutiny of the government's use of coercive interrogation techniques against Al Qaeda suspects, including Padilla. And that would have taken jurors deep into the shadowy underside of 's war on terror – a journey in Padilla's case that wends its way from his cell on an isolated wing of the US Naval Consolidated Brig in , through covert CIA interrogation sites overseas to an alleged torture chamber in .

"This is a part of the war on terror the Bush administration would rather keep quiet. But details are emerging. What they reveal is the aggressive – and at times, ruthless – pursuit of intelligence information, and the selective public release of some of that intelligence when it serves the administration's goals."

A former gang member who converted to Islam, Padilla was portrayed as the mastermind of a plot to explode a radioactive "dirty bomb" in an unidentified city when he was arrested with great fanfare in May 2002 at a Chicago airport.

Padilla was detained for three years without charges -- or a lawyer -- as a so-called enemy combatant. He then was bumped to the civilian justice system in what legal reporter Dahlia Lithwick calls the administration's "bounce-around strategy" when it became obvious that the courts to which Padilla's lawyers were appealing were looking unfavorably on his harsh treatment and the Supreme Court was about to step in.

"As was the case when the government sought to execute Zacarias Moussaoui, the theory of criminal liability may be that it is enough that Padilla wanted to be a terrorist. In that sense, we have a legal theory that may borrow from the worst and most vague aspects of the criminal and military models from which Bush has cherry-picked for so long: Jose Padilla faces a lifetime in prison for having engaged in a criminal conspiracy to be nothing so much as an 'unlawful enemy combatant.' "

Is this what the Founding Fathers intended?

Bravo - brilliant post and I hope you don't mind me promoting over at my blog. Not that I have so many readers, but what you have here needs to be read.

The US is the contemporary version of Hitler and so many other despots. Despots have two dull tools in their tool kit... Fear and Hatred.

They wield them with skill and - here is the essential part - the lemming-like masses respond like a Stradivarius to a violin virtuoso.

I look back over the course of my life (49 years) and watch how history proves over and over again how we have been manipulated by our government and dumbed down beyond belief.

It disgusts me and terrifies me, yet it inspires me to keep staying strong with thinking and reasonable like minded people.

The Padilla case is a joke and the fact that it even stayed in the courts and has come to this is a great cloud over any last remaining shred of democracy and free thought, not to mention justice.

Oh and so long winded am I in that comment- sorry, that I neglected to say....

I do doubt that this is remotely what the Founding Fathers had in mind.

I think the founding fathers intended something along the lines of Camp Security for POWs where they stay in the cage for the duration.

Which is the fate that should have befallen Padilla rather than a civilian trial.