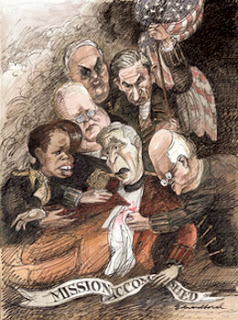 The great journalist David Halberstam left us a timely gift before his untimely death earlier this year -- an eloquent essay in which he argues that George Bush's verison of history, like the Iraq war, is based on wishful thinking, arrogance and a total disdain for the facts.

Halberstam knows history, and while I stand in his shadow, so do I, which means that Bush's exerable and frequent comparisons of the Iraq war to World War II and himself to Harry Truman, to cite two of the more egregious distortions, rub especially raw.

It almost goes without saying that the reason for this history mongering is because Bush and his coven cling to the canard that history will prove their failed policies and reckless actions successes.

Herewith some excerpts from "History Boys," Halberstam's essay in the August Vanity Fair:

Ironically, it is the president himself, a man notoriously careless about, indeed almost indifferent to, the intellectual underpinnings of his actions, who has come to trumpet loudest his close scrutiny of the lessons of the past. Though, before, he tended to boast about making critical decisions based on instinct and religious faith, he now talks more and more about historical mandates. Usually he does this in the broadest—and vaguest—sense: History teaches us … We know from history … History shows us. In one of his speaking appearances in March 2006, in , I counted four references to history, and what it meant for today, as if he had had dinner the night before with Arnold Toynbee, or at the very least Barbara Tuchman, and then gone home for a few hours to read his Gibbon.

Despite his recent conversion to history, the president probably still believes, deep down, as do many of his admirers, that the righteous, religious vision he brings to geopolitics is a source of strength—almost as if the less he knows about the issues the better and the truer his decision-making will be. Around any president, all the time, are men and women with different agendas, who compete for his time and attention with messy, conflicting versions of events and complicated facts that seem all too often to contradict one another. With their hard-won experience the people from the State Department and the C.I.A. and even, on occasion, the armed forces tend to be cautious and short on certitude. They are the kind of people whose advice his father often took, but who in the son's view use their knowledge and experience merely to limit a president's ability to act. How much easier and cleaner to make decisions in consultation with a higher authority.

I've been living with Truman on and off for the last five years, while I was writing a book on the Korean War, The Coldest Winter [to be published in September by Hyperion], and I've been thinking a lot about the differences between Truman and Bush and their respective wars, Korea and Iraq. Yes, like Bush, Truman was embattled, and, yes, his popularity had plummeted at the end of his presidency, and, yes, he governed during an increasingly unpopular war. But the similarities end there.

. . . George W. Bush's relationship with his military commander was precisely the opposite [of Truman’s with Douglas MacArthur]. He dealt with the ever so malleable General Tommy Franks, a man, Presidential Medal of Freedom or no, who is still having a difficult time explaining to his peers in the military how happened, and how he agreed to so large a military undertaking with so small a force. It was the president, not the military or the public, who wanted the war, and Bush used the extra leverage granted him by 9/11 to get it. His people skillfully manipulated the intelligence in order to make the war seem necessary, and they snookered the military on force levels and the American public on the cost of it all. The key operative in all this was clearly Vice President Cheney, supremely arrogant, the most skilled of bureaucrats, seemingly the toughest tough guy of them all, but eventually revealed as a man who knew nothing of the country he wanted to invade and what that invasion might provoke.

The president tends to drop off in his history lessons after World War II, especially when we get to and things get a bit murkier. Had he made any serious study of our involvement there, he might have learned that the sheer ferocity of our firepower created enemies of people who were until then on the sidelines, thereby doing our enemies' recruiting for them. And still, today, our inability to concentrate such "shock and awe" on precisely whom we would like—causing what is now called collateral killing—creates a growing resentment among civilians, who may decide that whatever values we bring are not in the end worth it, because we have also brought too much killing and destruction to their country. The French fought in Vietnam before us, and when a French patrol went through a village, the Vietminh would on occasion kill a single French soldier, knowing that the French in a fury would retaliate by wiping out half the village—in effect, the Vietminh were baiting the trap for collateral killing.

* * * * *
The arrogance of power, Senator William Fulbright called it during the years.

I have my own sense that this is what went wrong in the current administration, not just in the immediate miscalculation of but in the larger sense of misreading the historical moment we now live in. It is that the president and the men around him—most particularly the vice president—simply misunderstood what the collapse of the Soviet empire meant for in national-security terms. Rumsfeld and Cheney are genuine triumphalists.

. . . After the fell, we were at once more powerful and, curiously, less so, because our military might was less applicable against the new, very different kind of threat that now existed in the world. Yet we stayed with the norms of the Cold War long after any genuine threat from it had receded, in no small part because our domestic politics were still keyed to it. At the same time, the checks and balances imposed on us by the Cold War were gone, the restraints fewer, and the temptations to misuse our power greater. What we neglected to consider was a warning from those who had gone before us—that there was, at moments like this, a historic temptation for nations to overreach.

Illustration for Vanity Fair by Edward Sorel
Posted by Shaun Mullen at 5:33 AM
Email ThisBlogThis!Share to TwitterShare to FacebookShare to Pinterest