Iraq I: Dubya Doesn't Get It. Dubya Get's It 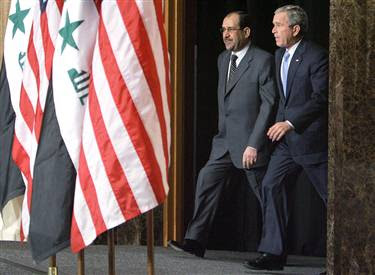 Today’s Iraq war cold shower is brought to you by President Bush’s media advisors, who in an extraordinarily dumb move got the president to invoke in a speech today "the tragedy of Vietnam" to bolster support for his own war.

In other words, bring up the worst defeat in American military history to defend staying the course in Iraq.

I suppose this is yet another example of a beleaguered president appealing to his prune-like base, or something, because there are but a few Americans (not coincidentally Republicans) who think the would have won in had it just kept at it beyond the 10 years and 58,000 lives that were lost.

Yet again showing his propensity for being the last person in the room to get a bad joke, the president has finally acknowledged that Iraqi Prime Minister Nouri al-Maliki, whom he once extolled as "the right guy for ," is in fact the biggest obstacle to the success of the last-gasp surge strategy.

This especially egregious example of reverse leadership – that is to say speaking out after practically everyone of any consequence already has, as opposed to taking the lead – came on the same day as Ryan Crocker, the U.S. ambassador to Iraq, called political progress "extremely disappointing" and a day after Senators Carl Levin and John Warner suggested that it was time for the Iraqi parliament to give Al-Maliki the bum’s rush.

Al-Maliki's response was to lash out at Bush and the U.S., declaring that no one has the right to impose timetables on his government and that Iraq "can find friends elsewhere."

"o one has the right to place timetables on the government. It was elected by its people."