Does Petraeus Have a September Surprise? 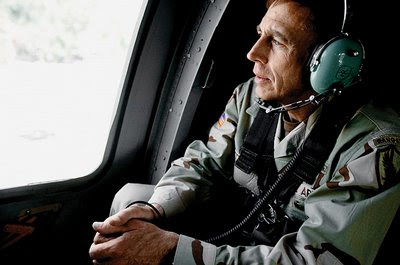 General David Petraeus, the commander of forces in , may have a surprise up his sleeve when he gives the much anticipated September progress report on the war.

The Los Angeles Times reports that Petraeus will recommend removing American troops from several areas where commanders believe security has improved, possibly including Al Anbar province where much has been made of tribal leaders uniting against Al Qaeda, and turning over security in those areas to Iraqi forces.

This partial pullback would not trigger a drawdown of troops, who would be redeployed to other areas, but will finally show if the surge is indeed working as the White House, Republicans and an increasing number of Democrats maintain.

Previous efforts to hold areas cleared of insurgents have failed miserably, and claims that the Iraqi army and other security forces are much improved will be quickly put to the test.

If they fail that test, which I have no choice but to believe they will, then that will effectively put the lie to the notion that the surge is succeeding and it will be back to Square One.

Speaking of surprises, there is a humdinger near the bottom of the LAT story: Despite President Bush's repeated statements that the September report will reflect evaluations by Petraeus and Ryan Crocker, the U.S. ambassador to Iraq, it will be written by the White House.

This is because the enablers on Capitol Hill passed legislation that leaves it to the president on how to interpret the report's data, so you can expect that what constitutes progress will be more fiction than fact.

"enablers on Capitol Hill passed legislation that leaves it to the president on how to interpret the report's data..."

Has anyone noticed that Petraeus rhymes with betray us?

Oh no I had not... very interesting indeed...

I used the rhyme a few months ago in a satire, "The Petraeus Plan to Abolish America". Two months after graduating from the US Military Academy in West Point, Petraeus married the daughter of the Superintendent of West Point at the time, a retired Army General. He's establishment all the way. The satire linked here includes more details about Petraeus, his military background. Of course Generals are picked and kept who don't deviate from the party line, which would make it more telling if one ever did, when it mattered: