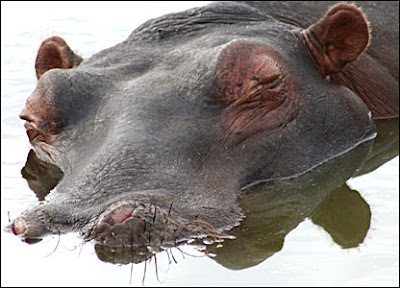 A HIPPO NAPS IN SOUTH AFRICA

Every time something bad happens with this administration we get new articles saying that President Bush now has some great opportunity to do...something less bad. At this point the articles almost write themselves.

Now that Alberto Gonzales has decided to walk away from the smoking wreckage once known as the U.S. Justice Department, it will be instructive to see whether President Bush decides to hand the reins to another incompetent crony (assuming there are any left), or whether he takes the high road (a rare excursion) and actually nominates someone with the smarts and integrity to repair the beleaguered institution.

President Gerald Ford took the latter route in 1975, not long after he replaced the disgraced Richard Nixon and was tasked to clean up Justice. The department had been badly tainted by Watergate; as Ford later remarked, "it was essential that a new attorney general be appointed who would restore integrity and competence." He tapped Edward Levi, a legal scholar with strong leadership skills who earned plaudits from Democrats and Republicans alike; as Antonin Scalia would later write, "(Levi) brought two qualities to the job, a rare intellectuality and a level of integrity such as there could never be any doubt about his honesty, forthrightness, or truthfulness."

Will Bush opt for the Levi model, and pick an independent-minded outsider? I suspect that would not be his first impulse, given his habit of relying only on a small circle of diehard loyalists.

The problem with French winemaking is that there is far too much wine made, and far too much of it is mediocre or worse.

When Sen. David Vitter was brought low by disclosure of his phone calls to the D. C. Madam, it was another instance of furtive deviant behavior in a private setting. But [Sen. Larry] Craig’s solicitation of sex in a public place is a reminder that anonymous homosexual encounters in “tearooms” are far from a practice of the past.

Moral outrage seems to be the reaction of choice to this kind of behavior. Sadness might be another.

The obituaries for entrepreneur and TV legend Merv Griffin in the mainstream media are predictably lacking certain details.

Gay readers have learned from the recent deaths of Susan Sontag, Luther Vandross, Ismail Merchant and others not to expect too much in the way of honest reporting in the obit pages. Celebrities are doomed to an eternity in the closet when it comes to how the mainstream media cover gays, even in death.

If the plays had been written with a word processor on a computer that had somehow survived, we still might not know anything definitive about Shakespeare's original or final intentions — these are human, not technological, questions — but we might be able to know some rather different things... We might discover the play had originally been called GreatDane.doc instead of Hamlet.doc. We might also be able to know what else he had been working on that same day, or what Internet content he had browsed the night before (since we'll assume Shakespeare had Web access too). While he was online, he might have updated his blog or tagged some images in his Flickr account, or perhaps edited a Wikipedia entry or two. He might even have spent some time interacting with others by performing with an avatar in Second Life, an online place where all the world is truly a shared virtual stage.

. . . We may no longer have the equivalent of Shakespeare's hard drive, but we do know that we wish we did, and it is therefore not too late — or too early — to begin taking steps to make sure we save the born-digital records of the literature of today.