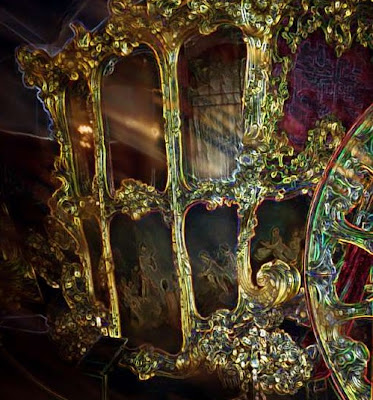 We observe the ebb and flow of our political leaders' fortunes from a simple and safe two-dimensional perspective. They earn our esteem and trust or do not. Success smiles on them or does not. They stay clear of controversy or wallow in it. Sooner or later, they retire or are pushed from the stage.

We may occasionally remark that "Senator Stanley was born under a bad sign" or other allusions to there possibly being a perspective beyond those two dimensions, but except for reading the daily horoscope with our morning coffee we stay comfortably within the confines of those dimensions that conform with our cradle-to-grave world view.

On the surface, the arc of Alberto Gonzales' stormy career in Washington followed typical two-dimensional signposts. But I've long had the feeling that there is another dimension that reveals a heckuva lot more about him and other public people. Commentators don't notice this dimension in their rush to be authoritative, edgy or first with a story. And even if they did, it wouldn't make sense to them because they were born under a literal sign.


* * * * *
It's the morning after Gonzales' resignation and I've just come back into Kiko's House from viewing the opening phase of a total lunar eclipse as I write this. It was so amazing. The crickets are cricketing, but the birds that would be singing their songs at this hour are silent and will remain so until the eclipse is over.

So I'm feeling a good deal less two dimensional than usual as I introduce Dr. Clarissa Pinkola Estés, a friend, psychoanalyst and folklorist who is possessed with the ability to not just see that other dimension beyond our normal scrutiny but also describe it in vivid strokes.

In an enthralling post over at The Moderate Voice that is unlike any of the zillions of others you've read in the last 24 hours, Dr. E takes us into that dimension as she muses on the rise and fall of Alberto Gonzales.

She does this by stirring together the mythos of the Carreta del Muerto, in which a passenger climbs on board a gilded carriage without realizing the driver is Death, and the fairy tale "The Red Shoes" in which an impoverished child who has made her own shoes from cloth scraps is walking in a forest when a gilded carriage draws up beside her and she is beckoned inside by an old woman dressed in finery.

Following are excerpts of Dr. E's essay, although I urge you to read the whole thing.

"But, the child, dazzled by the wealth and accommodation, and offer of friendship from on high, cannot hear her own conscience, her own instincts for self-preservation. So overwhelmed is she by the opportunity . . . without consideration, she scrambles up into the carriage."

So what of Alberto Gonzales and his red shoes?

"[W]hether the red shoes were too big for him, too fast for him, or controlled by others by unseen means, whether he wore them willingly, or suddenly woke with these as requirement of his office . . . someone tapped the soles of his shoes, and thus he began to dance. Eventually danced crazy and out of control. No limits. Dancing into hearings, dancing around the topics, dancing and dancing.

"Mr. Gonzales, like the child in the tale, is, in reality, a boy from nowhere, he says. Those of us from poor beginnings are often all the more vulnerable to gilded carriages, that's for sure. For Mr. Bush to choose a Latino boy from poor beginnings means extra loyalty from that boy, and more importantly, an ever grateful ally. The operative word: grateful.

"There is often in those who come from nothing a perpetual wonder that we are in the presence of those who claim to breathe rarified air. It ought be our first warning sign that we are about to lose our wits and be exploited. But, more often being invited into the sanctum sanctorum can seem a wondrous step away from our history of our ancestors and parents . . . All the more reason to be wary when sudden gold is offered with wheels.

"So, Mr. Gonzales, like many, stepped into the gilt conveyance willingly, gladly, likely at first seduced by all the trim and fit . . . and especially by being able to be unlike his father, unlike his mother, being able to ride instead of walk that dusty road.

"Fairy tales have such irony. Mr. Gonzales' feet were severed by those he severed. Those persons who raised the 'hew' and cry, along with Congressional committees; together they all hoisted the axe . . . and though it was not a clean cut, but a severance from a hundred cuts . . . it is done at last."


Detail of photograph of "Caretta" by Marina Ludanova

Once again you bring Dr CPE to the party and for that I stand in awe of you and with gratitude for you.

Wisdom is so frequently left outside the gates in these days, but not at Kiko's House.

Shaun..you continue to amaze...in this case because again you hit topics that get me a thinkin and then for better or worse, a-writing.
Your post here can be desribed in many ways but one certainly is "When ethics brush up with power."
This is exactly the theme of my play (lauded by Arthur Miller among others) produced in 1978 at Stockbridge Theater Festival.
I pondered on those who like Gonzo went astray in the halls of power during Nixon/Watergate.
Called "Home Room", A hippy chick teaches the Ten Commandments in elementary school to prepare citizens for demands on their ethical resources only to run afoul of the conservative, flag waving, Ten C's loving town Fathers who forego their principles to oust her for her non conformity; albeit choosing bigotry over principle. It could structurally be rewritten today, making the protagonist gay, to much the same end.
Much the same end as your thoughts, as usual, mister Shaun.