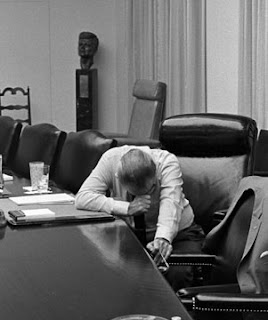 Lyndon Baines Johnson would have turned 99 years old today if he were still alive, but as it was he died a broken man only four years after leaving office in ignominy and on the very day that his successor, Richard Nixon, publicly admitted for the first time what Johnson could not: That the U.S. was defeated in Vietnam.

LBJ (see photo) was well aware as he lived out his days at his Texas ranch that his legacy would be the Vietnam War and not the Great Society legislative triumphs he engineered in the wake of JFK's assassination.

So too was Nixon well aware in retirement that Watergate would be his legacy and not the triumphs he engineered, including creation of the Environmental Protection Agency and opening diplomatic ties with China.

Remarkably . . . no, check that, unremarkably since George Bush is himself so unremarkable . . . there is nothing beyond the catastrophe of the Iraq war to shore up his own legacy. Six-plus years in office and not one single domestic or foreign achievement worthy of mention. No, budget busting tax cuts for the rich don't count.

Not one thing. Zero. Zilch. Nada.

Well, I guess that is remarkable.

Hat tip to Robert Stein at Connect the Dots

i will digress on the GWB legacy -- there is plenty --- all of them are directly leading this country and planet on the road to ruin and disaster....

wait till the children of his supporters and the evangelicals have to REALLY deal with the bush legacy....... lets see how fast they will sing his praises....

Imagine someone being the appointed leader of the 'Free World," effectively having a measure of dominion over all earth and not visibly growing as a person; not a whit.
I think that is god awful amazing. Stunning, really.