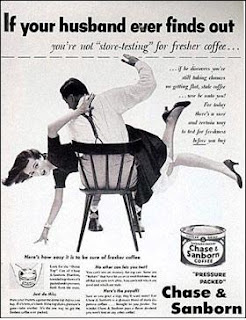 What if your wife, even after graduating the prestigious homemaking course at Southwestern Baptist Theological Seminary with a degree in ladylike submission, still won't behave? Uber-conservative Christian patriarchs everywhere now have a solution!

Give her a good spanking. For how to incorporate this into your marriage, see the "Christian Domestic Discipline" site.

Baggy pants that show boxer shorts or thongs would be illegal under a proposed amendment to ’s indecency laws. The amendment, sponsored by city councilman C.T. Martin, states that sagging pants are an “epidemic” that is becoming a “major concern” around the country.

My 11-year-old daughter and I just did her back-to-school shopping. Shopping for a 'tween is a little like being a presidential candidate—you try to find some middle ground in a world of clamorous extremes. I want her clothes to reflect the fact that she's still a girl, but I'm willing to let her hint at the young woman she is about to become. What I don't want her to bring home from the mall are clothes—and there are plenty of them—that inspire this sort of paroxysm: "Lolita, light of my life, fire of my loins."

[W]e rest our hopes in the next generation. Sort of. The Our Bodies/Our Daughters Award goes to Mattel. The folks who brought you Barbie are collaborating on a new line of make-up -- for 6- to 9-year-olds. For this we award them and all their ilk a special cosmetic for the next year: egg on their face.

Australian authorities may have hit on a magic formula to stop young studs from speeding, an ad campaign that features young hotties mocking their manhood.

The risque ads show devilish young lads burning rubber to impress chicks, cutting off a woman at a crosswalk, and fishtailing to impress their pals.

Then it shows the young hotties trading knowing glances and waggling their pinkies. A sympathetic granny looks at a woman in the crosswalk and . . . waggles her pinkie. A pal in the backseat looks at the teen driver who’s just fishtailed and . . . waggles his pinkie.

The slogan: "Speeding - No One Thinks Big of You."

Ouch! Talk about hitting below the belt!

"The message is: If you’re trying to impress people, this doesn’t impress anyone. People see you as a clown," said John Whelan of the New South Wales Roads and Traffic Authority. The $1.6 million state campaign, launched in late June, aims to cut a high road death toll by slowing down the main offenders, young men age 17 to 25. From 2002 to 2006, they represented 7 percent of drivers in the region but were involved in 34 percent of the state’s fatal crashes.

Fortune senior editor Geoff Colvin asks the question, "are Americans too lazy?" His answer ("yes!") . . . Leisure time (including sleep) increased an "enormous" 7 hours per week in the past 40 years -- that's an earth-shattering 15 minutes a year!

When children get lost in a mall, they're supposed to find a "low-risk adult" to help them. Guidelines issued by police departments and child-safety groups often encourage them to look for "a pregnant woman," "a mother pushing a stroller" or "a grandmother."

The implied message: Men, even dads pushing strollers, are "high-risk."

Are we teaching children that men are out to hurt them? The answer, on many fronts, is yes. Child advocate John Walsh advises parents to never hire a male babysitter. Airlines are placing unaccompanied minors with female passengers rather than male passengers. Soccer leagues are telling male coaches not to touch players.

Back when I wanted to be a fiction writer, I wanted to be the kind of fiction writer who has a dramatic slide into the abyss. It wasn't long after I stopped writing short stories that it occurred to me that dying old, desperate and alone probably wasn't nearly as inspiring for the people it happened to as it was for twenty-year olds looking for an excuse to smoke too much.

In the second half of the past century, the nun known as Mother Teresa was a celebrity of goodness, devoting herself to the most wretched people on earth with a selflessness that transcended religious belief.

As a magazine editor, I chronicled her life for millions of all faiths and no faith at all. To learn now from her newly published letters that she had her doubts and despair serves only to strengthen admiration for what she accomplished over a long life.

Risking sacrilege by mentioning George Bush in the same sentence, Mother Teresa’s uncertainties are a reminder of how fallible human beings rather than religious zealots are the ones who do good in this world.

She once told an interviewer, "I’m only a little pencil in God’s hand, writing a love letter to the world." The little pencil wrote well.