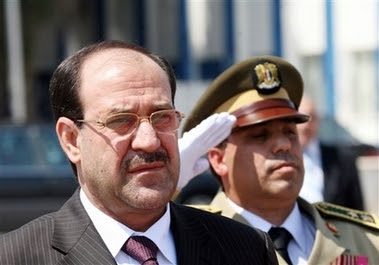 . . . brought to you by the U.S. intelligence community and Senator John Warner.

The spooks have released a declassified version of the National Intelligence Estimate on Iraq, only a small portion of which was released earlier in the month.

The report concludes that Prime Minister Nouri al-Maliki may not have the ability or capacity to "push forward" legislative reforms and states that improvements in the security situation, political system and economy are not likely unless there is a fundamental shift in governance.

I was gonna write about how this plays into President Bush's current lip lock with the Vietnam War, but Kevin Drum beat me to the punch at Political Animal:

"So we can't stay and we can't leave. Terrific. What's worse, we now have a president who's officially decided to take history lessons from Rambo. Turns out we were this close to winning in Vietnam when the Defeatocrats decided to pull the plug. And with that, yet another longtime conservative fantasy makes its way out of the fever swamps and into the public discourse, where we'll all be expected to stroke our chins and pretend to take it seriously for the next week or so."

Click here to read a PDF version of the NIE.

Meanwhile, Warner is calling on the president to begin withdrawing troops from in time for Christmas.


The influential Virginia Republican's statement following a recent four-day trip to the Middle East further roils the political environment ahead of a much-anticipated progress report to be delivered on September 11 (!!!) by General David Petraeus, the top commander in .

Although Warner had already broken with Bush's strategy, this was the first time he endorsed pulling troops out by a specific date:

"I can think of no clearer form of that than if the president were to announce on the 15th that, in consultation with our senior military commanders, he's decided to initiate the first step in a withdrawal of armed forces. I say to the president respectfully, 'Pick whatever number you wish.' . . . Say, 5,000 could begin to redeploy and be home to their families and loved ones no later than Christmas of this year. That's the first step."

Photograph by The Associated Press
Posted by Shaun Mullen at 5:21 AM
Email ThisBlogThis!Share to TwitterShare to FacebookShare to Pinterest