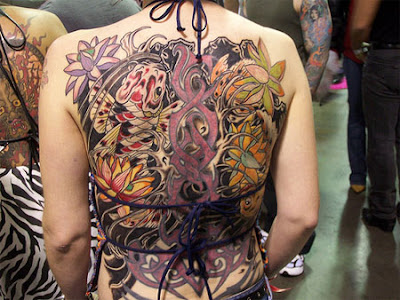 As you'd expect from a bloke who wrote a book titled No Tattoos Before You're Thirty, I'm not a huge fan of most skin art, mainly because it's a mistake impressionable kids can't easily undo and also because I've never come across an image, slogan or design that I want to see on my body every day for the rest of my life.

Then there are the people who actually have tatts: although I know many wonderful and adjusted men and women who've cartooned up, there do seem to be an inordinate number of wankers, wannabes and weirdos who equate inking the yin-yang symbol on their bum with being cool.

I know it's very hip nowadays to get ironic tattoos - I remember going to a Sparklehorse gig a few years ago and his percussionist, surely the nerdiest man ever to strut the stage at the Annandale Hotel, sported a flaming violin on his forearm - but this represents the minority of tattoo owners.

Most of the girls I see strutting around with arse antlers and blokes sporting tribal bands and Chili Pepper-style patterns strike me as, well, clueless tools and their "f--- you world" pretensions more of a "look at me" cry for attention.

Throw in the masses of criminals, strippers and junkies whose use of tatts is as original as the business suits they'll tell you they're rebelling against and I wonder if the whole phenomenon is less about self-expression than it is about about low self-esteem . . .

Patients seeking an appointment with a dermatologist to ask about a potentially cancerous mole have to wait substantially longer than those seeking Botox for wrinkles, a study published online by The Journal of the of Dermatology said.

Researchers reported that dermatologists in 12 cities offered a typical wait of eight days for a cosmetic patient wanting Botox to smooth wrinkles, compared with a typical wait of 26 days for a patient requesting evaluation of a changing mole, a possible indicator of skin cancer.

I have held for years that the so-called Women's Liberation movement was quite simply the natural formation of a “collective unconscious” among women that baby making had been demoted. In effect women did not and were not choosing liberation. Nature had “liberated” them in order for earth to achieve human population/resource homeostasis.

Consider this quote . . . which reduces the entirety of womens' natural reproductive options and the intellectual underpinnings of the Womens Rights Movement to a few simple choices:

"If women decide to spend their 20s clubbing rather than child-rearing, and their cash on handbags rather than diapers, that's up to them. But the transition to a lower population can be a difficult one . . . "

Looking back from this perspective, in the now, one wonders what was all the fuss really about?

Disclaimer: I believe passionately that women did not enact the liberation they so passionately espoused. They were liberated, as in less responsibilities and more free time, by the nature mandated necessity to have fewer children. I think a substantial portion of the theory of Women's Lib is false. The steps called for post-liberation to achieve equality and fairness were and are valid.

Oh the poor widdle babies. Being on the down low isn't working out so well for them, it almost never does. The Republican party long ago forgot that people who live in glass houses, shouldn't throw stones. In the last few months, two men have been busted for soliciting sex in the men's room (Gross, isn't it dirty in there?) and another Senator's number (now considered old news) was found in the phone records of a prominent escort service. All are married. Barney Frank must sit at home and laugh over the the stupidity, hypocrisy and inability of the Republicans to get laid in the manner that they so obviously desire. Don't ask, don't tell. From McGreevy to Craig, the effort to deny their true biological urges has become an unmitigated disaster, both politically and personally. Then they try to justify the scandals by bringing up , but money in the freezer is nothing like dick in a box. Or stall. Makes you wonder what the next sex peccadillo will consist of . . .

From two years and many people's lifetimes ago. And I will ask the same question again. Will we ever learn?

Tomorrow will mark the tenth anniversary of the night the Princess of Wales died in a car wreck while being pursued, as always, by photographers.

In my last years as an editor, Diana’s was the face that launched a thousand magazine covers, a Cinderella who rose to the height of celebrity after marrying Prince Not-So-Charming.

In less than a year, she transformed herself from a shy, somewhat chubby teaching assistant into the world’s most stylish woman, a never-ending feast for the cameras.

But it turned out to be more a Faustian bargain than a fairy tale. She did her part by giving birth to two heirs, but the price was a cold husband who preferred his former mistress, royal resentment of her popularity and constant sniping by the palace establishment.