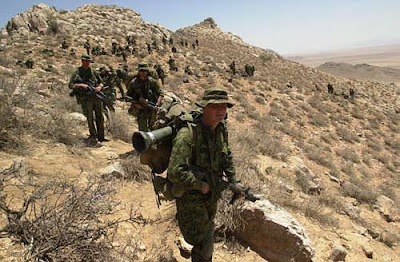 Newsweek magazine's cover story on the fruitless dragnet for Osama bin Laden is a good read, and in the end you want to tear your hair out because it’s obvious that commanders were more interest in show than go:

"The American effort to chase bin Laden into this forbidding realm was hobbled and clumsy from the start. While the terrain required deep local knowledge and small units, career officers in the military have long been wary of the Special Operations Forces best suited to the task. In the view of the regular military, such 'snake eaters' have tended to be troublesome, resistant to spit-and-polish discipline and rulebooks.

"Rather than send the snake eaters to poke around mountain caves and mud-walled compounds, the military wanted to fight on a grander stage, where it could show off its mobility and firepower. To the civilian bosses at the Pentagon and the eager-to-please top brass, was a much better target. By invading , the would give the Islamists -- and the wider world -- an unforgettable lesson in American power.

"Former House Speaker Newt Gingrich was on Rumsfeld's Defense Policy Board and, at the time, a close confidant of the SecDef. In November 2001, Gingrich told a Newsweek reporter, 'There's a feeling we've got to do something that counts -- and bombing caves is not something that counts.' "

When the struck in 2001, "there were probably 3,000 core Al Qaeda operatives," says [John] Arquilla of the . "We killed or captured about 1,000; about 1,000 more ended up in distant parts of the world. And about 1,000 ended up in Waziristan. But the great terror university in Afghanistan is gone; they've relied on the Web since. They haven't had the hands-on instruction and the bonding of the camps. That's resulted in low-skill levels. Their tradecraft is really much poorer."

The danger now, says Arquilla, is that the longer the Iraq War goes on, the more skilled the new generations of jihadists will become. "They're getting re-educated," he says. "The first generation of Al Qaeda came through the [Afghan] camps. The second generation are those who've logged on [to Islamist Web sites]. The next generation will be those who have come through the crucible of Iraq. Eventually, their level of skill is going to be greater than the skill of the original generation."