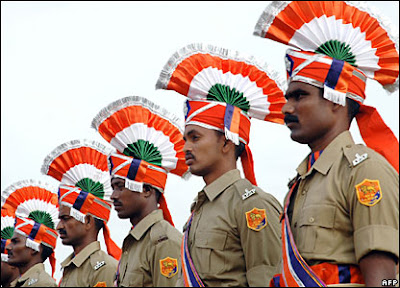 Indian police rehearse for 60th anniversary of independence from Britain.

"That’s the price of doing business," is the too-often-heard excuse from American companies that choose to overlook China’s loose business ethics and tight, verging on strangling, political controls.

The high cost of such enabling was on display, once again, yesterday when Mattel announced that it is recalling millions of Chinese-made toys contaminated with lead paint or containing dangerously easy to swallow magnets. And that follows discoveries of Chinese toothpaste laced with industrial solvents and drug-contaminated seafood.

’s Mayor wants to become ’s President in the worst way, and it’s beginning to show.

With Mitt Romney’s money producing results in the and polls, and Fred Thompson’s footsteps getting louder, Rudy Giuliani is pressing his case to the Republican Right with a prosecutor’s zeal.

Exaggerating his 9/11 presence and then having to apologize for it are only the latest signs that he is feeling the heat.

After saluting the Confederate flag in Alabama, taking on a racist adviser in South Carolina and puckering up to Pat Robertson, Giuliani has now turned to out-Bushing Bush on bellicosity by bringing aboard as foreign policy adviser Norman Podhoretz, who wants to bomb Iran yesterday and, just in case the Base should doubt his conservative conversion, adding to his retinue the rabid Admiral who swift-boated John Kerry in the 2004 elections.

The cult of Petraeus exists not because the general has figured out the war but because hiding behind the general allows the Bush administration to postpone the day when it must reckon with the consequences of its abject failure in Iraq.

Via the Asia Times, we discover that it is probable Pakistani President Musharraf gave a green light to the American military to go into ’s Northwest Frontier Provinces and take out the nearly 30 Taliban bases and severely curtail the incursions by enemy fighters into .

Alas, as has been the case many times it seems, we are too late.

For a man who no one seriously believes should be Attorney General, Alberto Gonzales seems to be acquiring more power, not less. Two weeks ago, under the administration's FISA "fix," the AG's office obtained new auditing authority over warrantless surveillance. This week, the AG’s office is poised to get the authority to "fast track" death penalty appeals. It’s important — and discouraging — for a few key reasons.

Even if the Attorney General weren’t an honesty-challenge incompetent, this would be a bad idea. But with Gonzales as the nation’s chief law-enforcement officer, it’s a ridiculously bad idea.

Now is the time for journalists who cover hip-hop culture to flex their muscles. The time for them to ask hard questions of these knuckleheads who call themselves emcees.

This is the perfect opportunity to shove a microphone in the faces of our most ignorant rappers and ask them: "Do you consider Natasha Aeriel a snitch?"

As we all know, Aeriel, 19, survived despite being shot in the head execution-style along with her brother and two friends in Terrance Aeriel, 18, Dashon Harvey and Iofemi Hightower, both 20, weren't so lucky.

According to Newark Mayor Cory A. Booker, Natasha has been extremely cooperative with authorities investigating the shooting. Although she'd been in and out of sedation and in severe pain, she managed to give police information that may have led to the arrest of three suspects.

Media and terrorism experts alike have remarked on the increasing sophistication of al Qaeda propaganda videos that continue to be released by the group's media wing, as Sahab.

One computer expert, however, has conducted extensive image analysis on many of the videos and concluded that in many cases the tapes were likely doctored to give a false impression of the speaker's location.

The very people most threatened by the ideology of Islamism and the institution of Sharia law –- gays, women, freethinkers -- are often the very people least likely to defend themselves against it. What we have on our Left is a culture of denial equal to, if not exceeding, the German Jews of the 1930s and one that has taken the canard about all politics being local to an almost ludicrous extreme.

Back in June, a number of blogs reported on a federal government survey about the average number of heterosexual sex partners for American men and women. The survey also covered drug use and a lot of other aspects of people’s sex lives, but what got the most headline attention:

. . . At this point, some of you are thinking "seven? four? Oh my god, I’m statistically such a slut!" But for the time being, let’s talk about the discrepancy between men and women. This would be considered “unsurprising” to many, right? Well, the New York Times reported that these numbers are mathematically impossible. It makes sense if you think about it. According to the CDC, the survey is supposed to represent the entire American population, with the exception of the homeless, the incarcerated, and the institutionalized. That’s surely a limitation, but not a massive one. The question was also specifically about heterosexual partnerships, so it’s actually impossible for men to have had more female sex partners on average than women’s male partners.

Poor Galileo. Imagine him trying to convince his contemporaries that he and they were whizzing along at 800 miles per hour on a spinning Earth. And at 66,000 miles per hour on an Earth that orbits the sun. "Ridiculous!" they might have said. "We have no sense of motion. The air is still. The birds perch unperturbed in breathless trees."

Galileo's opponents were adamant that the Earth did not move, and common sense confirmed their view. They made the nearly blind old man kneel on the marble floor of a palace and deny what he knew to be true. The Earth is at rest, he swore, and thereby evaded possible torture and confinement in a Roman prison.

"And yet it moves," he is purported to have whispered under his breath at the end of his public recantation. The story of the whispered remark is probably apocryphal, but it certainly expresses what must have been in his mind.

Galileo taught us convincingly that common sense is an unreliable guide to truth.

Money is like manure, it should be spread around.