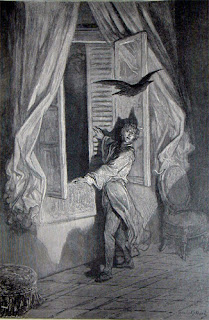 Edgar Allan Poe holds a certain fascination for me because the more I learn about the great American poet's short life the more amazing it seems for the influence he had on both his contemporaries and succeeding generations because of his pioneering work in several other genres -- the short story, detective fiction and science fiction.

Poe also has a certain hold on the burg where Kiko's House is situated. The story is that he got drunk after giving a lecture at the local college and was thrown out of the town's oldest taproom, which in Poe's memory uses a raven on its logo, menus, softball team T-shirts, and so on.

Only one problem: Poe already was dead when the taproom opened.

This is indicative of the mystery that seems to swirl around almost everything Poe, including a figure dressed in black, features cloaked by a wide-brimmed hat and scarf, who has crept into a churchyard to lay three roses and a bottle of cognac at Poe's grave each year on his birthday.

Has the identity of this mystery person at last been revealed?


Image: "The Raven" illustrated by Gustave Doré
Posted by Shaun Mullen at 5:11 AM
Email ThisBlogThis!Share to TwitterShare to FacebookShare to Pinterest