End of an Era: Karl Rove to Resign 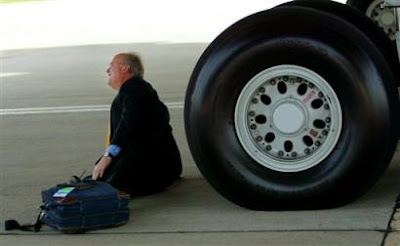 Karl Rove, the master of polarizing politics and George Bush’s longtime mentor and White House consigliere, is resigning effective August 31, bringing to an end one of the most controversial tenures of a presidential political operative.

Rove, Bush’s deputy chief of staff and a man so influential that he was a de facto Cabinet member, told the Wall Street Journal's worshipful Paul Gigot that:

“I just think it’s time. There’s always something that can keep you here, and as much as I’d like to be here, I’ve got to do this for the sake of my family.”

Rove, 56, is credited with engineering Bush’s successful entry into Texas and national politics and his dossier is full of allegations of dirty tricks and hardball dealings. He is currently a focus of several congressional investigations, including the U.S. attorney probe and whether he broke federal laws by making political presentations to government employees encouraging them to find ways to support Republican candidates.

Make no mistake: No matter what you think of him, Rove did his job well, at least until the realities of the world outside the Washington Beltway became so crushing that they could no longer be subsumed or blustered away.

I am reminded of a reader's comment at Political Animal in answering the paradox of why Bush, a mediocrity of the first water, has generated such intense loyalty in people:

"It must tickle someone like Karl Rove -- surely a geek who was picked on mercilessly in high school or a loser who could never get a date with the hot cheerleader -- silly pink to be able to watch his boss best all them high achieving Ivy League types who populate liberal circles. Bush is a proxy for a lot of conservative anger at our powerful liberal culture and the accompanying desire for revenge."

Rove has said that he planned to resign in 2006, but stayed on through the mid-term election cycle. He said his hand was forced when Joshua Bolton, the White House chief of staff, recently told senior aides that if they stayed past Labor Day they would be expected to stay through the rest of Bush’s term.


In the end, Rove’s legacy is a tarnished one: He leaves behind a president whose popularity has plummeted to historcally low levels and a war in Iraq of which he was a principal planner that has become a political albatross for Bush and the Republican Party.

While it is not unusual for ranking members of an administration to move on in the closing months of a presidency and there already has been some attrition since the Republican defeat in the mid-term election, the White House will be a different place without Rove.

The question is whether Bush will be a different president.

I wouldn't celebrate yet. Watch to see if Rove takes over one og the current rethug candidates campaigns next month. Rove was bad in the Whitehouse, but he's much more dangerous on the campaign trail. (more at my blog)

Oh please don't say that. It's bad enough that he didn't get dragged out of the White House in handcuffs for his shenanigans. The thought that he might return makes my stomach churn.