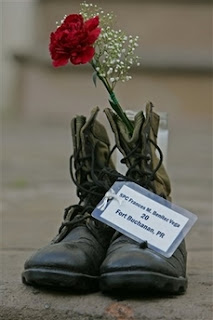 Today’s Iraq war cold shower is brought to you by the number crunchers as The Associated Press, who penetrated the Bush administration’s smokescreen about the success of the surge to find that deaths from political violence have increased since that last-gasp offensive began.

* Nearly 1,000 more people have been killed in violence across Iraq in the first eight months of this year, more than in all of 2006. So far this year, about 14,800 people have died in war-related attacks and sectarian murders. The AP accounted for 13,811 deaths in 2006.

* has gone from representing 76 percent of all civilian and police war-related deaths in in January to 52 percent in July, bringing it back to the same spot it was roughly a year ago.

Translation: Insurgents and militias have responded to the surge by pushing outward from the capital, which is exactly what was predicted by myself and a lot of other folks who keep an eye on the war.

Posted by Shaun Mullen at 10:22 AM
Email ThisBlogThis!Share to TwitterShare to FacebookShare to Pinterest