As Basra Goes So Goes Iraq 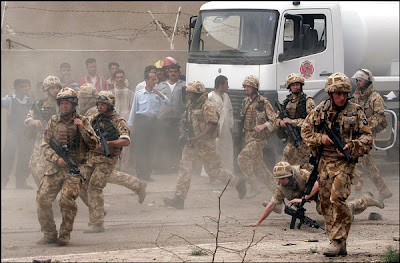 British troops rush to scene of chopper brought down in rocket attack
Today’s war cold shower is brought to you by the British.

Despite its years-long efforts to stabilize Basra in southern Iraq, the Royal Army is watching Shiite militias fill the power vacuum being created as their troops draw down by escalating their rivalries in a violent effort to control the region's rich oil resources.

And while you're toweling yourself off after that shower, prepare yourself an even colder one:

was once considered a success story, just like the White House is wishfully putting out the message that the surge also will be a success.

But the pattern emerging in Basra may well be the same nationally if elements of the Shiite-dominated national government (which has no Sunni ministers at the moment, as well as a Parliament away at summer camp) turn on one another when U.S. troops begin withdrawing.

This is because, for the umpteenth forking time, a military success is empty without a political success, and political success becomes more elusive the longer that troops – the Mother of All Flash Points – remain in country.

Let’s review the British phased withdrawal plan in , which in reality is the endgame for the s most steadfast Coalition partner:

Under the plan, British troops have left city center for a command post at the airport where they still can keep an eye on the border with and the Iraqi troops and security forces that they have trained. A big reason for this decision is that they have come under increased attacks involving roadside bombs in the city.

Former British PM Tony Blair peddled the line that it's "mission accomplished," and a White House desperate for good news enthusiastically endorsed that assessment, but this outbreak of feel good-ism masked a couple of realities:

First, Blair's popularity and that of the Labor Party, like President Bush and the Republican Party, was in the WC.

The biggest reason for these reversals of fortune is that a war that Bush started but has been unable to finish was been backed to the hilt by Blair and is now widely viewed as an unmitigated disaster. (Some 165 Brits have died in the conflict, a far cry from the 3,679 Americans, but substantially more any of the 18 other Coalition nations, which have suffered a total of 129 deaths.)

The biggest concern about the drawdown is that it's not likely that the burghers of are capable of running it without armed British nannies.

"Three major Shiite political groups are locked in a bloody conflict that has left the city in the hands of militias and criminal gangs, whose control extends to municipal offices and neighborhood streets. The city is plagued by 'the systematic misuse of official institutions, political assassinations, tribal vendettas, neighborhood vigilantism and enforcement of social mores, together with the rise of criminal mafias that increasingly intermingle with political actors,' a recent report by the International Crisis Group said.

"After Saddam Hussein was overthrown in April 2003, British forces took control of the region, and the cosmopolitan port city of thrived with trade, arts and universities. As recently as February, Vice President Cheney hailed as a part of 'where things are going pretty well.'

"But 'it's hard now to paint as a success story,' said a senior official in with long experience in the south. Instead, it has become a different model, one that U.S. officials with experience in the region are concerned will be replicated throughout the Iraqi Shiite homeland from Baghdad to the Persian Gulf. A recent series of war games commissioned by the Pentagon also warned of civil war among Shiites after a reduction in forces."

Photograph by Nabil al-Jurani/The Associated Press
Posted by Shaun Mullen at 5:34 AM
Email ThisBlogThis!Share to TwitterShare to FacebookShare to Pinterest

Winning and Democracy in Iraq are Oxymoronic Concepts
.
(How the dream of a Cheney/Chalabi “Palm-ocracy” came asunder.)

Iraq (as with its neighbors) was ruled by brutality and armed suppression before America began its occupation.
Iraq (as with its neighbors) will be ruled by brutality and armed suppression after the U.S. leaves.
No amount of troops or time frame under a half century will alter this formula.
America seeks to align itself with this, to-be-decided, new ruling force.
That this new ruling force will be a democracy is oxymoronic.
That the new ruling force will be a democracy aligned with the interests of the U.S. is even yet more naively ridiculous.
What the Cheney/neocon aggressors wanted and could have best hoped for, no matter how incompetent in assessing the tribal/religious nature of Iraq they were, would be to establish a "palmocracy."
When Arafat died I opined that hopefully, eventually, a Sunni palmocrat of Arafat's scheming mold would appear who would collect the graft and grease together a new working government. Tribes, religions, criminal elements, power seekers, moneyed neighbors with agendas and foreign born terrorists , as a mix, simply overwhelm this possibility.
Chalabi as a symbol of what a palmocracy might be was so enticing. Oh well!
Brutality and suppression will eventually create a new Iraq. The Iraqis want America out now. This desire can only increase.
It is entirely illogical that a ruling body will appear from the ashes of Iraq that will kiss the hand of its invader.
--One last tip, if you can, by stock in Crescent Condominium Development Limited. It's listed on the Iranian Stock Exchange and is reputedly a real favorite of the Mullahs.--

And what will YOU do when they come over here for you and/or your family and children?

What are YOU doing NOW to make things better?